Before Ji An and Dong Hoon’s hug by the train tracks, they shared an intimate moment in the comfort of their regular dating spot. In many ways, this private moment was their real farewell.

Of all the wonderful scenes in My Ahjussi, this was one of my favourite. In many ways, I feel this was the real farewell between Dong Hoon and Ji An.

Dong Hoon gets a message from Ji An while drinking with his Section 3 team. The whole time, he sits quietly while they enthuse about Ji An with new fondness. He strides to their regular date spot.

The camera pans to Ji An’s side profile, and then to Dong Hoon, who can’t help but smile to himself. It’s an involuntary smile, one that reveals his true feelings towards her, his joy on seeing her. It’s real emotion and a stark contrast to his expressionless face while drinking with his team. 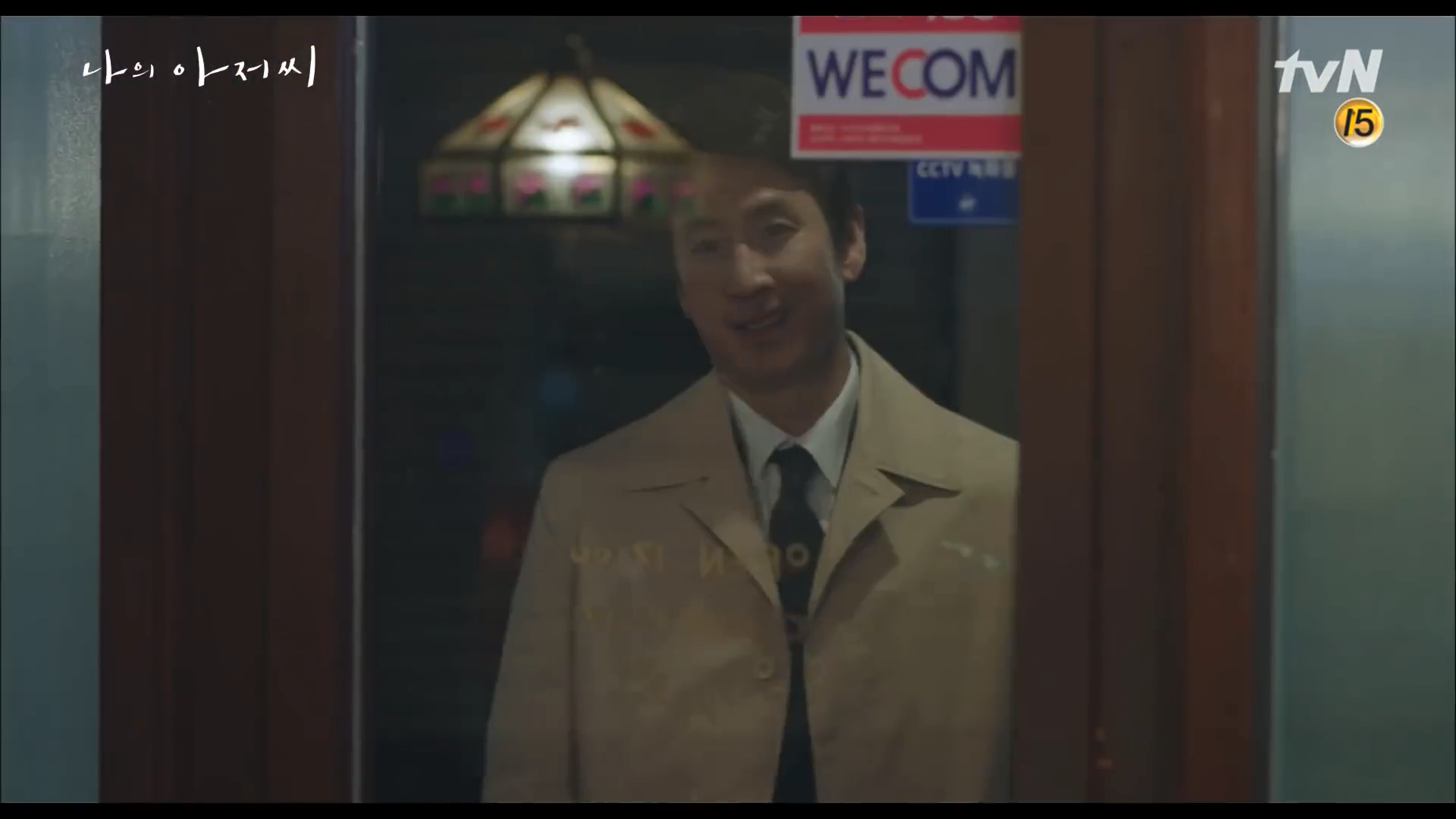 We watch them from outside the window as they chat about the chairman. Roaming camera shot from the outside. 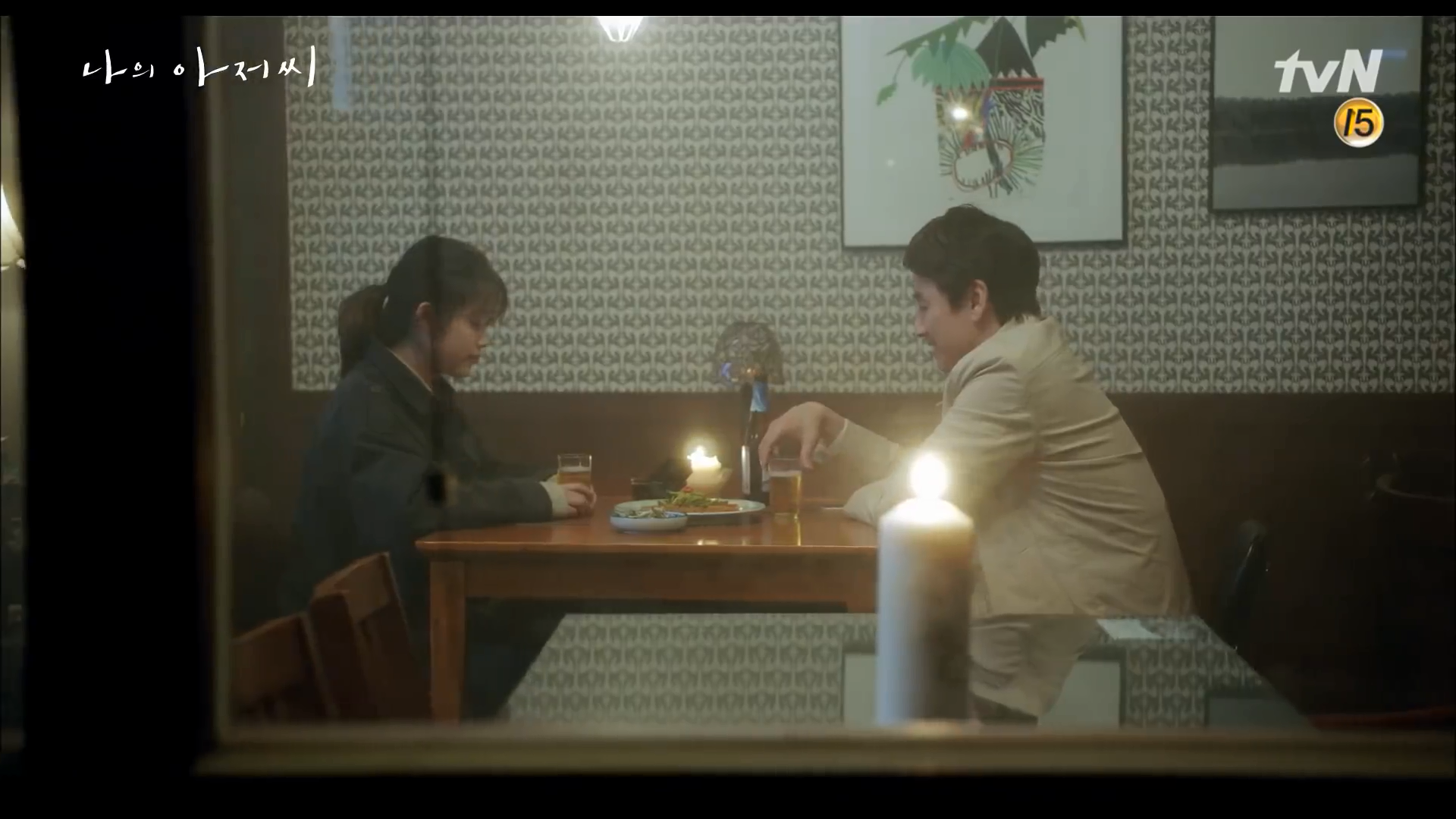 Then we get a close up of Ji An. The revelation that’s about to shake Dong Hoon’s world.

In an instant, Dong Hoon’s face falls. It’s like the earth has opened up beneath his feet.

The camera backs away, leaving Dong Hoon and Ji An some privacy. 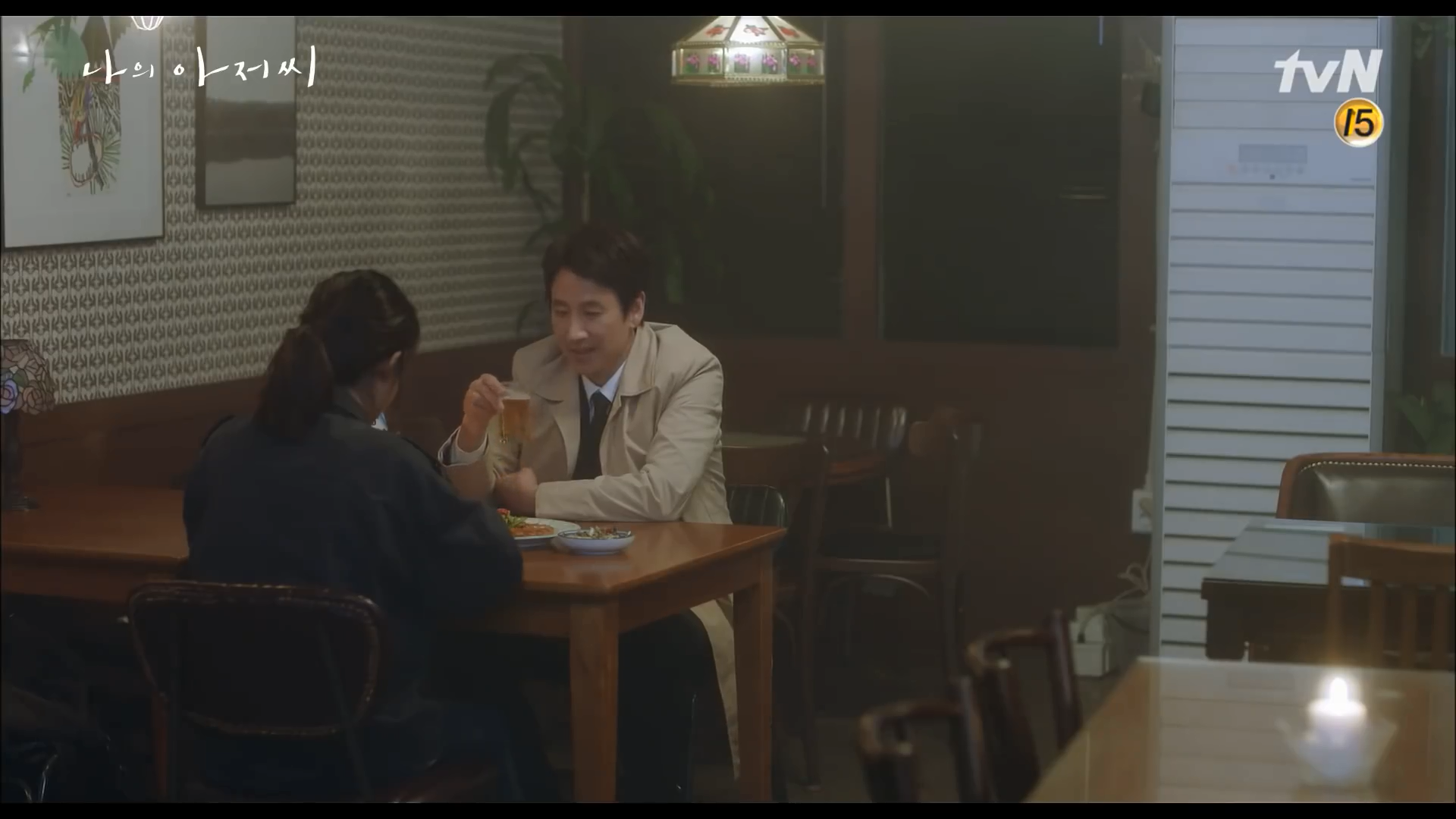 Dong Hoon: “Why do you have to go that far?”

To me, that’s one of the most memorable lines of the show. He picks up his cup, swirls the beer and drinks because that’s what he does when he’s too overwhelmed by his emotions. When it gets too much for him to handle. When he doesn’t know what to say.

Ji An has made peace with her decision, and in her usual direct manner tells him why.

Ji An: “I feel pathetic hanging around this neighbourhood just to catch a glimpse of you.”

Dong Hoon can’t control it anymore. Despair takes over his face. Not just that she’s leaving, not just that it’s something he can’t do anything about. But because it’s all on him that she’s leaving. It’s all because of him. He’s pushed her away, and more than anything else he hates himself for pushing away the most precious thing to him, the one that helps him breathe. It’s like the air has been completely sucked out of him.

Ji An continues. A man who can be happy without her has no charm to her. She’s going to try and live life as a different person. 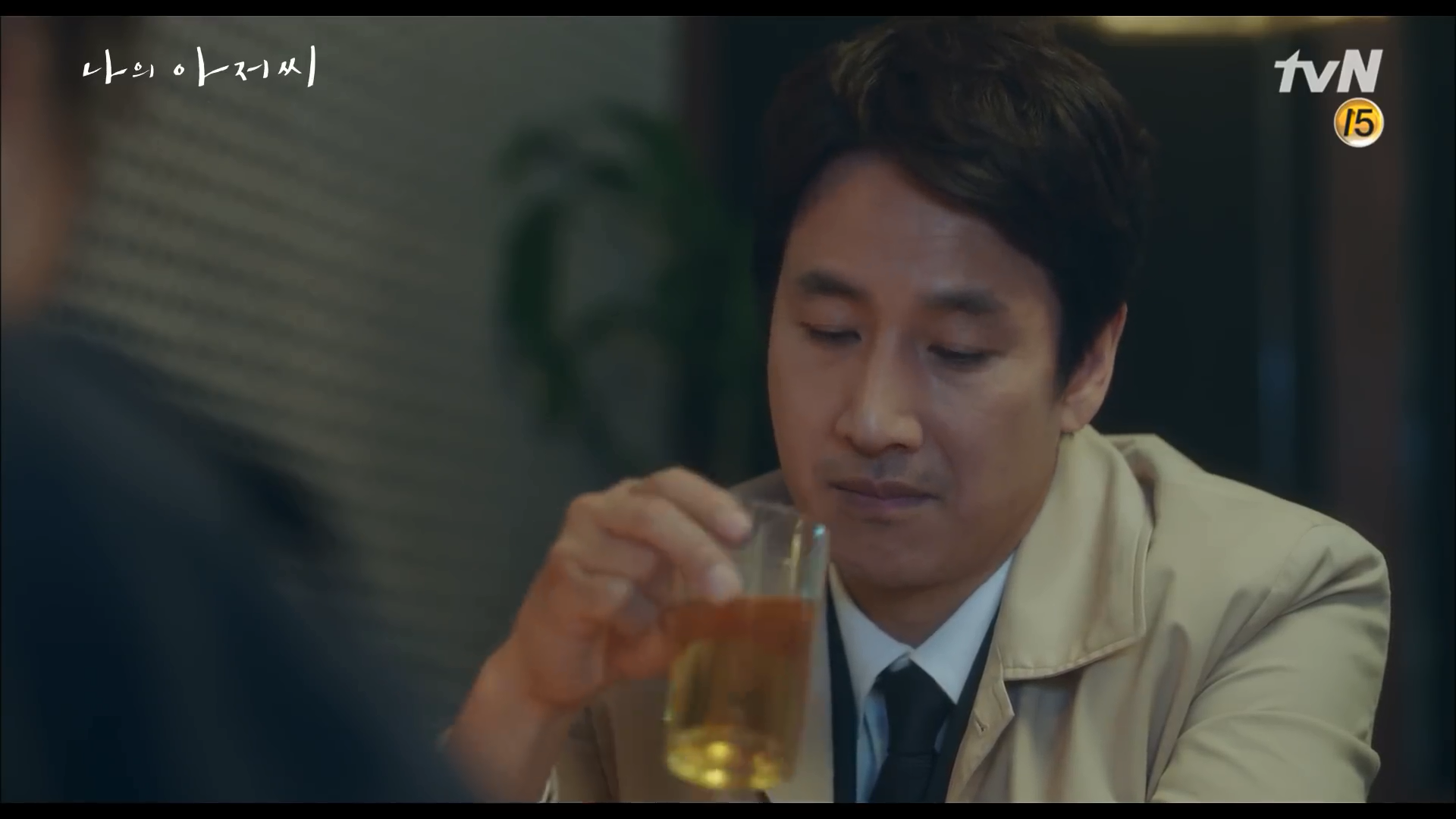 Another swirl of the cup, another drink. Dong Hoon’s complete helplessness, his complete inability to say or do anything in a situation that is entirely his fault.

Ji An: “While I was running away, the saddest thought was that you’d avoid me if we met again by chance.” 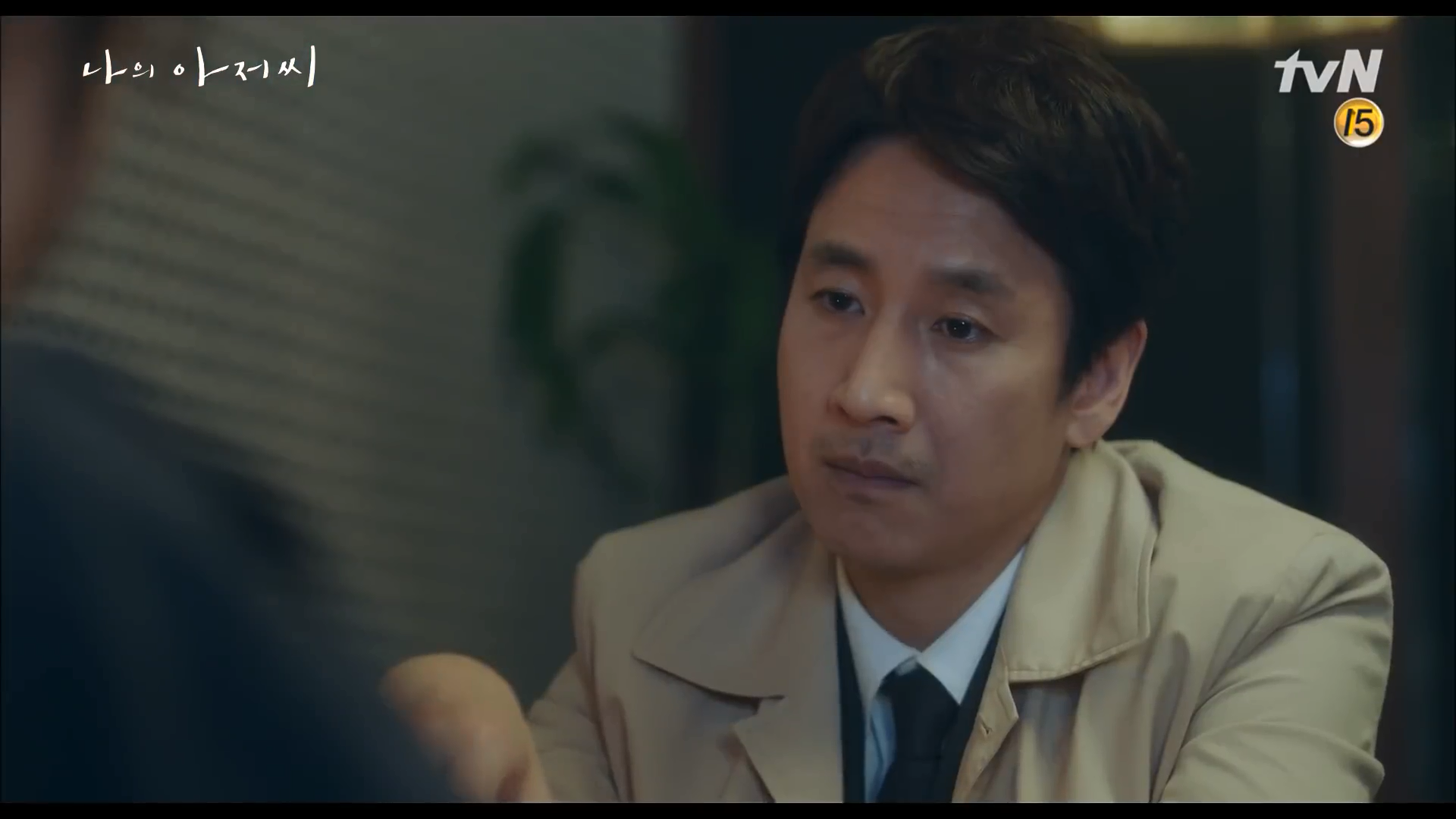 Dong Hoon’s face sinks. He’s plunged into the pit below his feet, engulfed by sorrow, remembering his desperation when she ran away.

Ji An thanks him for being so good to her. 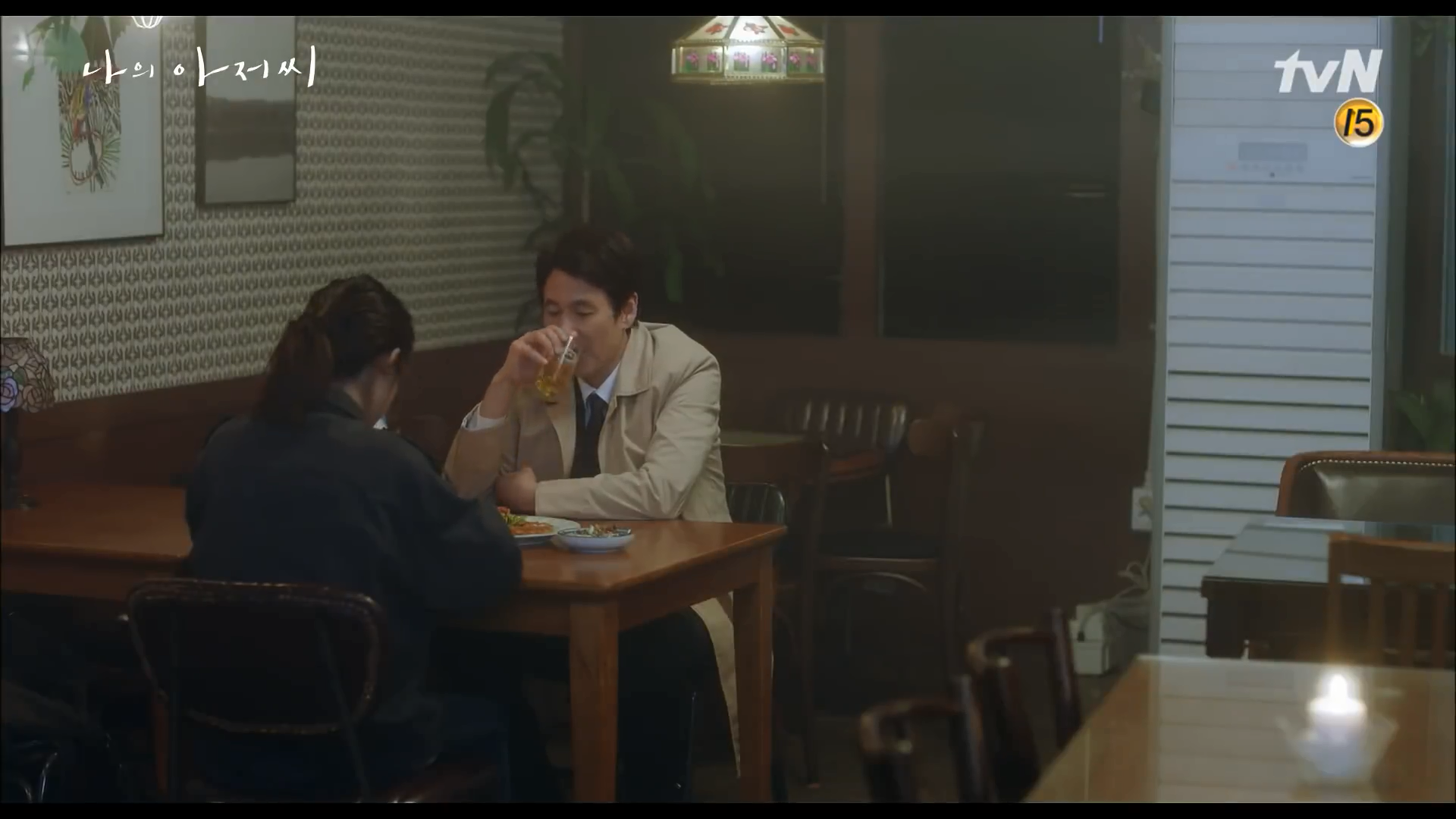 A third swirl of the cup, a third drink. Dong Hoon is bereft.

Ah, but wait! This drink is for courage. It gives him strength to say the words buried in his heart.

Dong Hoon: “You, you must have come to this neighbourhood to save me. I, who was about to die. You, who saved me.”

Ji An: “I lived for the first time, because I met you.”

Dong Hoon seems momentarily stunned by her reply. And then he smiles, as though remembering all the things they have been through with great fondness.

“Let’s truly be happy now”, he says, and they clink glasses. 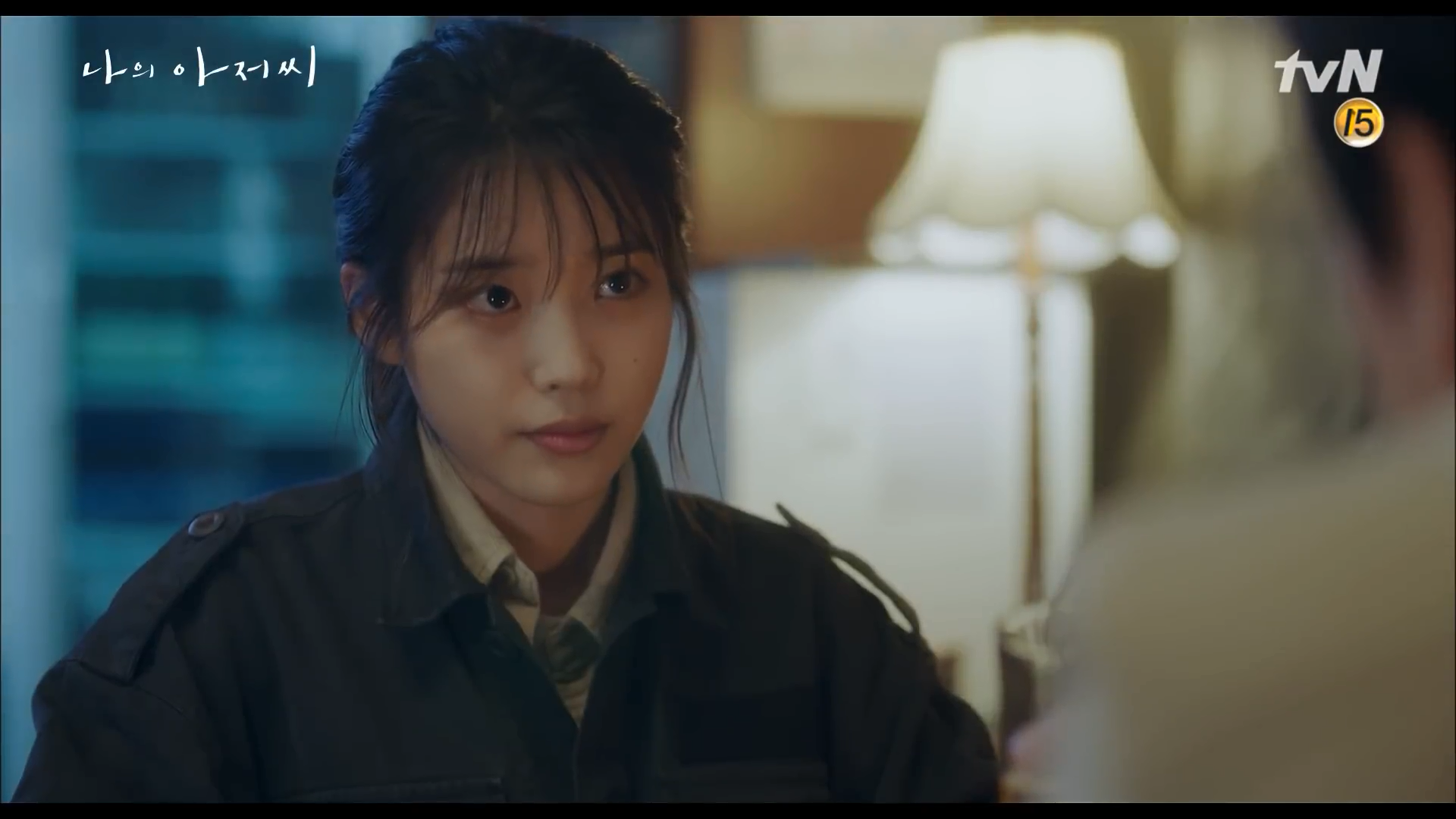 Really, Ahjussi? Will we both be truly happy now, apart from each other?

(And we all know how that plan worked out)