@chickfactor once said, “It’s like Jae-Chul said, they are speaking in code to each other. The audience knows the code, because the writer-PD taught it to them. You can refuse to see it if you need absolute confirmation via traditional visuals (kissing, etc), and/or don’t want to believe in this romance, which is fine. Everyone has that choice. But the code is there, and it’s quite clear and consistent.”  One facet of this code is the creative use of camera and the very deliberate choice of scene.  When viewers take the time to understand this code, nothing has to seem vague and ambiguous anymore.

by kerfuffle_95 from Soompi

I was watching episode 8, the part where they were celebrating the mother’s birthday, and I found the brief video call with Ji-Seok insightful.

Below is an excerpt of family’s conversation with Ji-Seok (after he greets his grandma, said Hi to his mom, and asked his dad about the homework)

Ji-Seok (to Sang-Hoon): Uncle! Don’t be too lonely. I’m sure you’ll find a good woman.

DH: I heard that you have a girlfriend. Do you like her a lot?

JS: What about Mom, then? Is she nice or pretty? Choose just one.

SH: Hey, you have to be sure to choose the correct answer. It’s different when you’re talking to married couples.

JS: Hurry up! Is she nice, or pretty?

SH: Yeah, if someone is nice and pretty, then they’re amazing. Yep.

1. Based from this conversation, I can see that Ji-Seok is a mature kid. He knows the reality that there are couples who separate and that it’s okay to move on and find someone else (based on what he said to his uncle, though it may have been half-jokingly). He also judges and likes people for their personality and not merely for their outward appearance (based on how he described his ‘girlfriend’). I wonder if this conversation is meant to signify that Ji Seok would also be cool, in the event that his parents separate, and his Dad finding someone who is not only pretty but also nice, someone who can lift/has lifted Dong Hoon from his loneliness.

2.  On Dong Hoon saying that Yoon Hee is amazing. At this point, he already knows about her affair, so I don’t know which part of Yoon Hee he still sees as amazing. Since Ji Seok also asked him to choose just one, had Dong Hoon answered ‘pretty’, he risked being perceived as loving her superficially only. If he answered ‘nice’, well just like what Dong Hoon said to his son, he must still really like Yoon Hee. Which at that time, even prior to learning about the affair, I don’t think he does. I think ‘amazing’ was a safe answer, and I’m ok with him not offering an explanation about it because I don’t think he even has.

3.  On Sang-Hoon.  Sang Hoon thinks that Dong Hoon’s answer ‘amazing’ = ‘pretty and nice’. My answer is no. Because if that’s how Dong Hoon feels, why didn’t he just say both. Or why didn’t he just answer ‘pretty’, if he’s too shy to admit he really likes his wife by saying ‘nice’. If a couple is truly comfortable with each other, I don’t think a wife would mind hearing the answer ‘pretty’ instead of ‘nice’. She’d be glad her husband still thinks she’s pretty/ appreciate her looks despite being in her 40s, or given the fact that her husband probably gets to interact with much younger and prettier girls at work. I remember Dong Hoon mom saying, I forgot which episode, that once women reach their 50s, they don’t like looking at themselves in the mirror anymore.

4.  Interestingly, throughout this PRETTY and NICE conversation (from the point Dong Hoon asked his son if he has a girlfriend, up to the point Sang Hoon interpreted what Dong Hoon meant by amazing), we never saw their reaction, all we get to see is Ji-an. As usual, listening on everything that was transpiring, while on her part-time job. 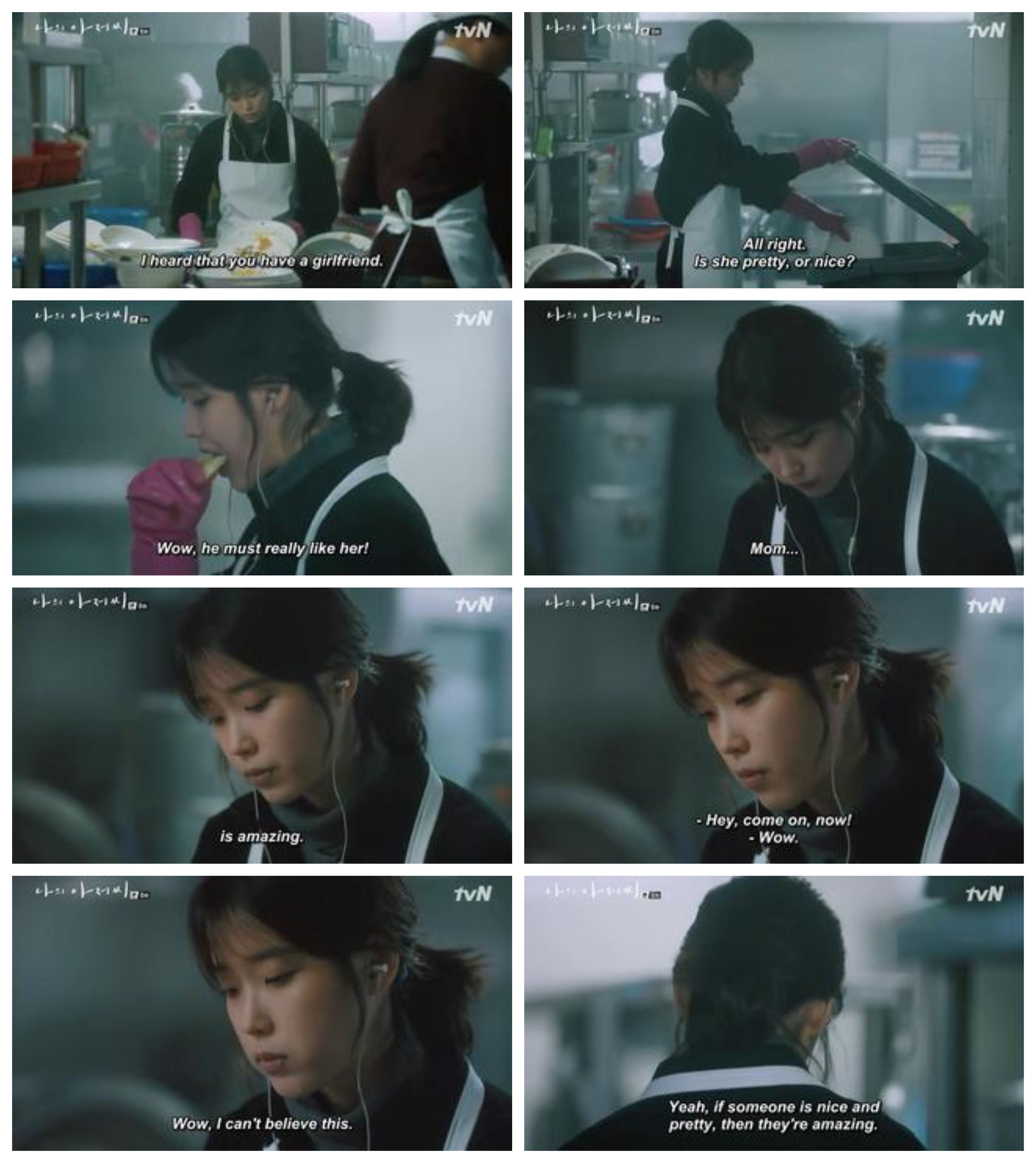 I don’t think it was random, the reason we only see Ji-An, is because as per Dong Hoon in the prior episodes, who again is both pretty and nice? 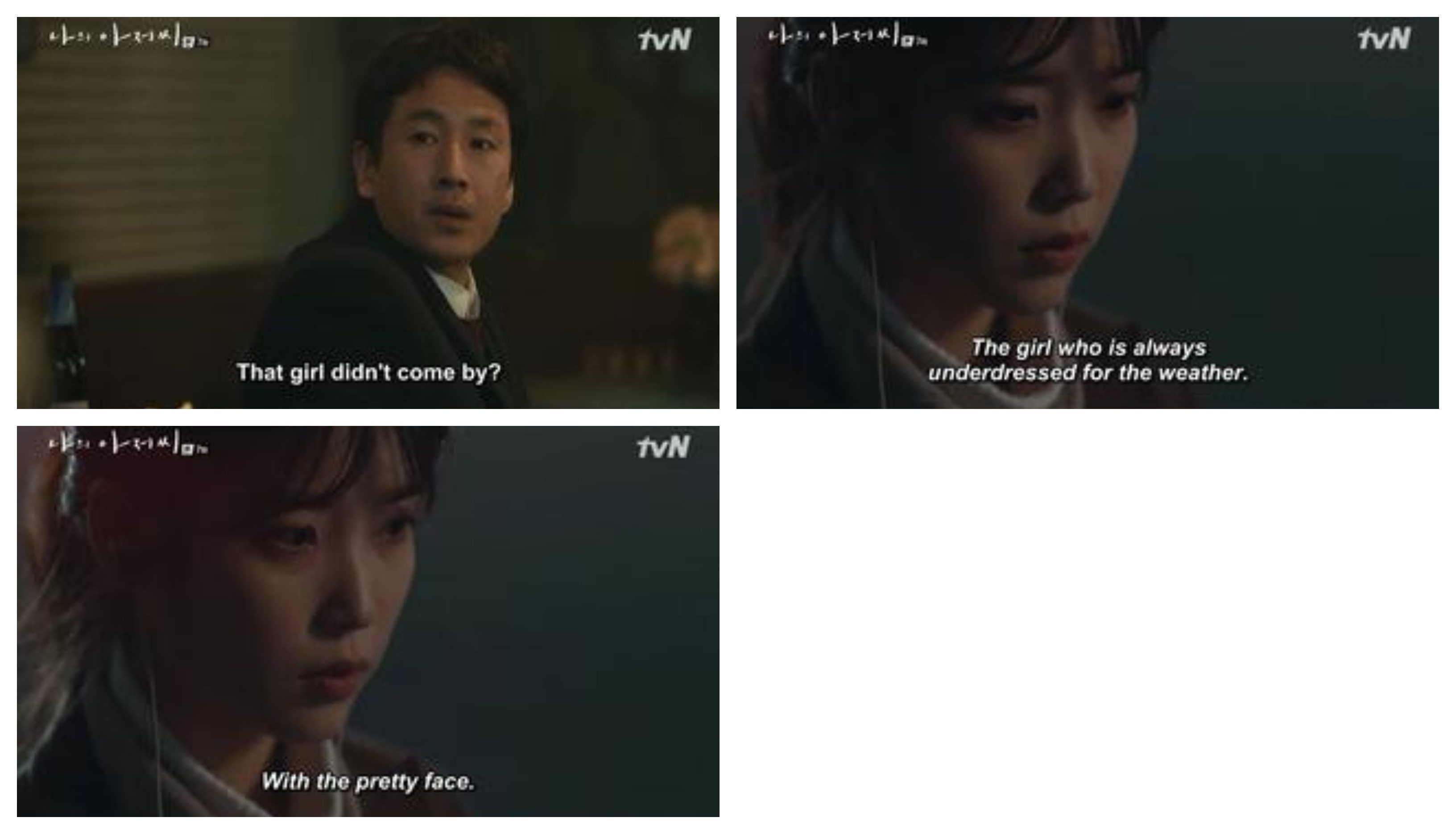 What he said in Korean is (Dong Hoon’s description for Yoon Hee) 훌륭해 – which the Naver dictionary translates as “excellent.” It is a safe answer but also truthful. It’s something you would say about someone who has accomplished a lot, which she has. So it’s a fair answer, but deliberately avoids “pretty” or “nice” which are more like personal endearments, which he can’t bring himself to say (understandably).

On Sang Hoon thinking that Dong Hoon’s answer ‘amazing’ = ‘pretty and nice’ –> He said this to cover up for the fact that Dong Hoon’s response was oddly impersonal – and he wanted to make it sound better for Ji-Seok’s sake. At this juncture, Dong Hoon knows about Yoon Hee’s affair, but the brothers do not.

Anyway, what Sang-Hoon did here is actually very sensitive and kind.

Other posts on Dong Hoon and Ji An’s code:

Give Me Slippers = I Love You

4 thoughts on “Who Is Pretty and Nice?”