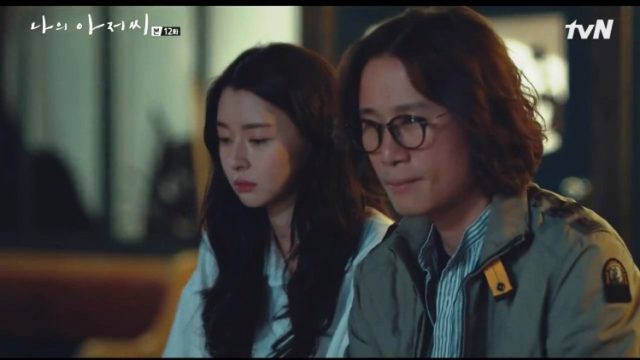 One Soompi member discovered that even the shortest instrumental snippet is given title that befits the scene unfolding.

I decided to Shazam anything musical in this drama after finding the Simon and Garfunkel song. I have found that the tunes used in the drama have been named very carefully. By tunes I mean the soundtrack without lyrics.

Around 9 minutes – Sorry for Myself by Lee Yun Ji – Ji An is visiting her grandma and reads what she wrote to Dong Hoon in the notebook. Dong Hoon is in the cleaning microvan in the  parking lot as the rest play football. He recalls the conversation with Yoon Hee when he finally had to deal with the adultery.

Around 12 minutes – Feeling Guilty by Jeon Se Jin – As Yoon Hee talks about the adultery (If you want to keep quiet about this for your mother and Ji Seok, I’ll do that…I’ll do whatever you want) and Dong Hoon says “I don’t want to make you miserable just to make it easier for me.”

Around 13:51 minutes – An Ordinary Day – as Dong Hoon sees Ji An standing on the street when they stop at the traffic sign. That was not an ordinary day!!

Around 20.59 minutes – My Self in My Heart – When Dong Hoon returns to the office to help his subordinates finish the report. Ji An is also there…

Around 24:40 minutes – The Truth is Revealed by Lee Ruri – when the photographer comes into their subway car as Ji An and Dong Hoon discuss her confession. Ji An tells Dong Hoon that the dude has been taking photos of Dong Hoon. Dong Hoon confronts him. The photographer runs away.

Around 33:21 minutes – My Family by Lee Yun Ji – as Ji An says thank you to the gang when they walk her to her door. She’s kind of bowled over by the closeness of the gang, even that they know her Landlord, who they ask to watch out for her.

Around 40:51 minutes – Background Check by Lee Yun Ji – when Ji An’s gaming buddy informs her that the auditors have found compromising photos. Ji An looks over at Dong Hoon, calls Yoon Hee and goes out to meet her.

Around 43:13 minutes – A Thousand Years by David Molina – when Yoon Hee and Do Joon Young meet on the roof top, then Ji An meets up wth them. Yoon Hee sets him straight about her regret in wasting her time being with him.

Around  55:45 minutes – Realism by Bon Choon Koo  – when Sang Hoon is speeding the microvan, intending to take that curve at high speed. Ki Hoon screams at him to stop. He gets out of the van and goes off to confront the Director who’s giving Yura hell.

Around 1:04:00 minutes – Their Way Of Love by Lee RuRi – as Yura and Ki Hoon discuss the parameters of their relationship (I’ll kill you if you break up with me). The other neighborhood men tell Dong Hoon about how Yura was hitting Ki Hoon, and how he just took the hitting, which is unlike Ki Hoon.

Around 1:08:00 minutes – But You Don’t Care by Mi-Sex – When Jung Hee is going to give Dong Hoon his ringing phone, only to see the caller as Monk. She then responds to his texts as DH.

Around 1:11:00 minutes – Dangerous Child by Jeon Se Jin – when the evil director changes the name of the character witnesses to include Ji An. Ji An is then called to the board room for Dong Hoon’s interview.

Around 1:13:18 minutes – Trap by Seo Yae Rin – when Ji An is asked by the evil director, “So, you like him?” She replies Yes…. then elaborates and the evil  director’s  side look stupid.

Around 1:15:24 minutes – My Family by Lee Yun Ji- as Ji An talks about how Dong Hoon has made her feel comfortable in the company, that as she passes by and feels a sense of pride in working there.