Soompi members discuss how the drama’s structural engineering jargon (cracked concrete, structural reinforcement, pillars, emergency escape routes) mirrors Dong Hoon’s state of life / marriage. What causes these cracks to form, and how can they be reinforced?

Title courtesy of The Last Ship. I Swear.

So I’ve started my rewatch, and I couldn’t help noticing the significance of this incident in Episode 1:

The safety inspection team needs to check the water tower. But it’s too cold: the drone won’t work.

Dong Hoon starts climbing the tower. It’s cold, icy and dangerous. One slip — the only thing holding him to the ladder is a carabiner hook.

He measures the crack. Then he takes out the scanner (it’s called a Ferro scanner, I checked! Or concrete reinforcement detector. It checks the size and depth of steel bars in concrete).

And then it slips out of his hand.

A loud crash as the scanner hits the ground at top speed.

The impact breaks the scanner completely, wires, nuts, bolts all flying into the air.

If the tower is Dong Hoon’s life / marriage, what does this mean? He’s completely lost his ability to assess the cracks / flaws in his life! He’s unable to look clearly at himself, his life, and his marriage anymore, because his scanner has completely broken apart.

I just thought this was amazing use of symbolism and foreshadowing. On my first watch I had no idea, just a foreboding sense from seeing something come crashing from so high up and breaking into pieces.

In my rewatch of episode 7 and in the preview to episode 8, Dong Hoon says to someone that, “None of the people I had thought of as pillars are actually holding me up.” This is after Dong Hoon discovers that Yoon Hee is cheating.  WRITER-NIM didn’t come to play!!

Can we say that even in their poor marriage, (Mr Stability and Predictability) Dong Hoon still looked to Yoon Hee and the marriage as a “pillar” in his life? No wonder the change in conversation and focus on Ji An at the end.

Other people who should be pillars are his mother and brothers and the estate gang. When the Monk friend disappeared, Dong Hoon inherited the title of “Most Likely to Succeed in Life.” He carries everyone’s expectations, but none of those people is much help to him.

At the beginning of Episode 8, Dong Hoon and Ji An are drinking and the howling wind starts blowing down the door of the bar. If I’m not mistaken, this is the bar owner who is also divorced. Wind / breeze in Korean uses the same word as affair… param.

The three of them go out to check the stress measuring equipment that Dong Hoon had put a while back. Dong Hoon looks at a gadget on the wall that’s tracking a crack. 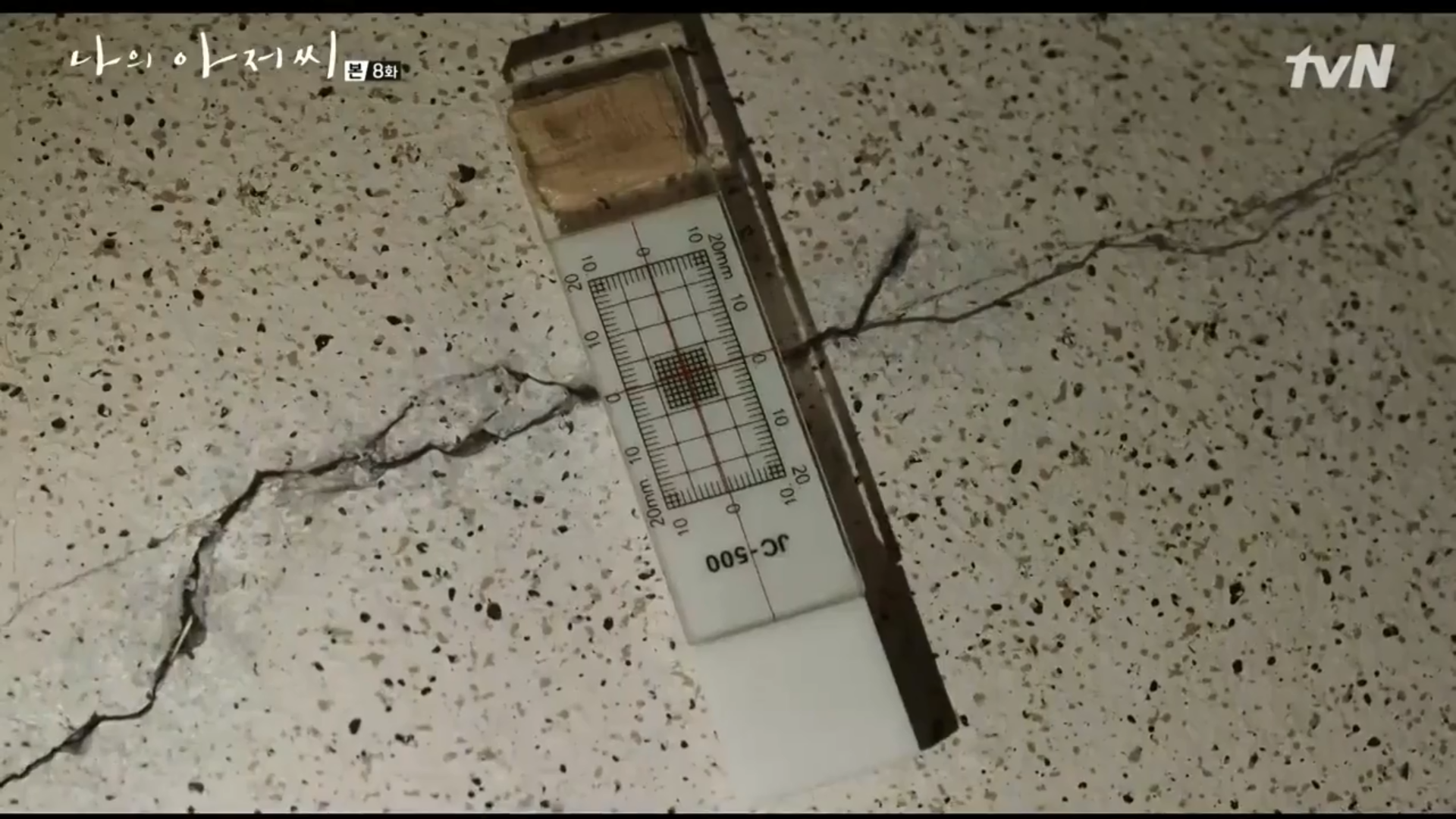 They go over to the plumb line which is spinning. 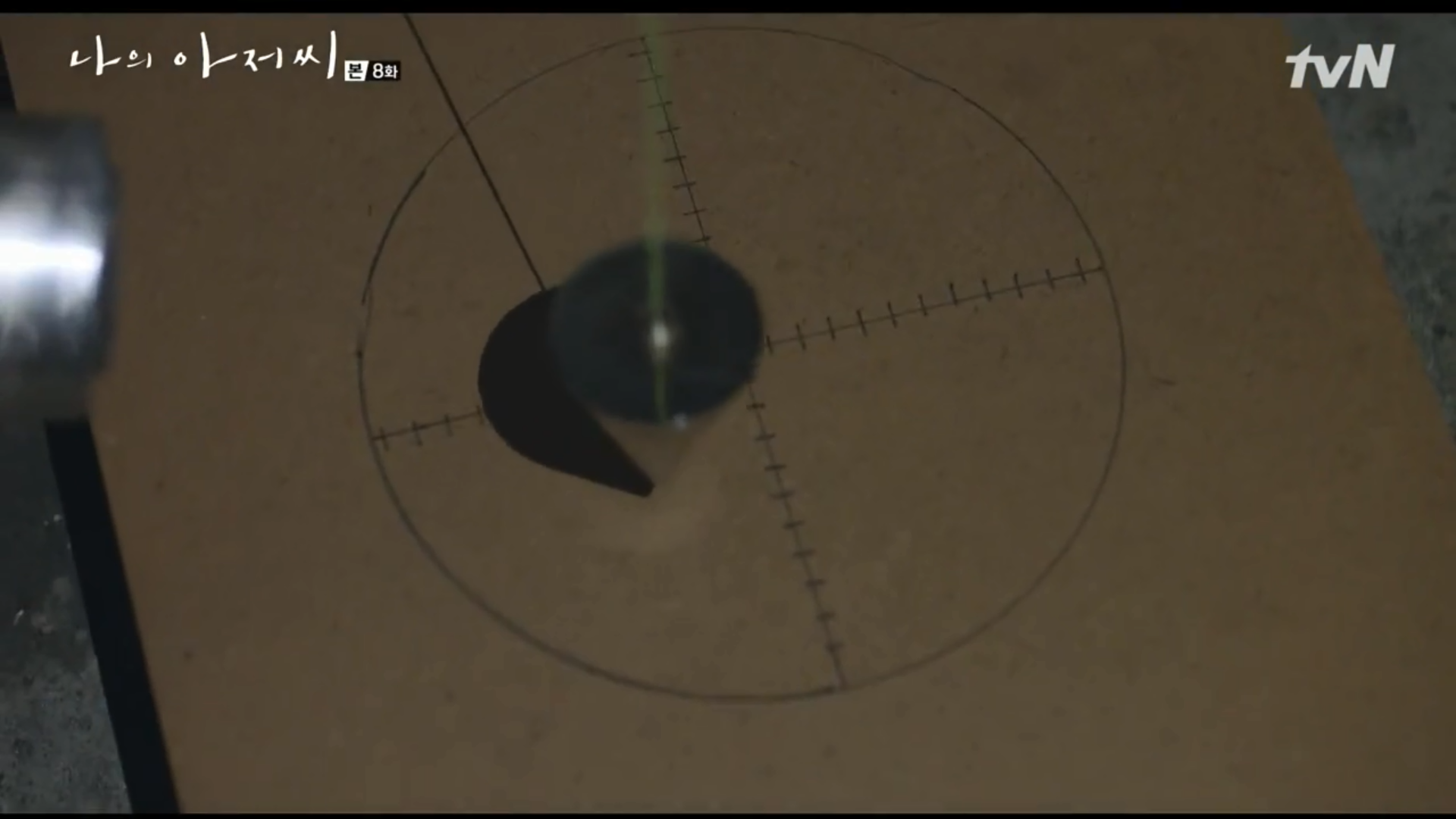 Dong Hoon: This part is just as it was. It hasn’t gotten any worse.

Dong Hoon: Seeing how there aren’t issues with the frame, it must be an internal problem. But it could stabilise later, so I’ll keep an eye on it.

Bar owner: But why is it that buildings nowadays always have issues?

This is right after Ji An makes Yoon Hee listen to the recording of what Joon Young really thinks of her and the affair. (Yoon Hee then goes to the campsite and doesn’t find Joon Young who’d said that they couldn’t meet up because he was there.)

The conversation was definitely put there as a mirror of their dead marriages. When the bar owner says that the already cracking building is leaning a bit more; that’s Dong Hoon, leaning more now from the additional strain that the revelation of the affair has caused. The building is the marriage and the cracks can be the affairs their wives had.

The internal problem Dong Hoon talks about must be his internal strength… his overwhelming stress that is also causing “cracks” in his “building”, what with his breathing and draggy walking. He’s not a “fit structure” due to these problems straining him.

Remember that there’s been at least two times he stops in the street and keels over in pain, much like the building. It happens in episode 8 after he walks Ji An to her place and walks home. She hears him breathing and panics.

When Dong Hoon says that the building could stabilise later (an extremely curious Ji An is right there) I’m thinking, Hmm, she’s the reinforcement pillar in his life and the one who’ll stabilise him!

Even when Dong Hoon first heard from the loan shark that Ji An actually intended to steal the money, the same visual representation was used by the director. The moment Dong Hoon was deep in thought about it, his team was inspecting an office and his deputy called his attention to decays in the roof hidden in sight (they opened a board in the ceiling and they saw some cracks).

In episode 14, during the interview for the new director’s position, Director Yoon gleefully points out an engineering “flaw” in one of the buildings Dong Hoon has designed.

“This one shakes even with the smallest amount of agitation.  The tenants are afraid that they’ll lose customers, and are keeping quiet.  But how long do you think they’ll be able to do that? If the media finds out about this it will only take moments for our company’s image to be destroyed!  How does this building that you designed shake so much?”

Dong Hoon’s foundation has been shaken to the core by his wife’s betrayal, and that with his own company’s CEO out of all people.  If words about it get out, the company’s image will be destroyed, not to mention his own reputation and family’s good name. So in desperation, perhaps with some amount of denial, he offers an explanation and an excuse: It is not shaking!

“Does it make sense that this huge building is shaking just because a few people are running?!?”

“Yes, this isn’t a common occurrence.   It’s only a resonance phenomenon, so we can install an anti-vibration mechanism on the roof.  When this became an issue a while back, I requested that such mechanism be installed, but my request has yet to be accepted.”

Dong Hoon realizes that things are falling apart all around him, and he tries to reach out to his friends and family members.  Unfortunately, as much as they love and try to sympathize with him, they have not been able to give him the kind of support/comfort he specifically needs to lessen his burden.  And if the shaking continues, sooner or later he will collapse to the ground just as any building would.