Soompi members discuss how the drama’s structural engineering jargon (cracked concrete, structural reinforcement, pillars, emergency escape routes) mirrors Dong Hoon’s state of life / marriage. What causes these cracks to form, and how can they be reinforced? Is there a need for an emergency exit route? This is part 2 of 3.

Title courtesy of The Last Ship. I swear.

I want to contrast the first words we hear in My Ahjussi at Saman E&C with what we hear in the last episode at Dong Hoon’s Structures Company.

What I’m hearing in episode 1 is uncertainty, lack of sufficient manpower and reinforcing materials, etc. What I hear at Dong Hoon’s company is certainty (because of expertise) and a firm plan to provide in the case of an emergency – an escape (exit) route, because the current blueprint will not cut it. Notice that while Dong Hoon talks of an escape route, the camera pans over the pics on his desk. 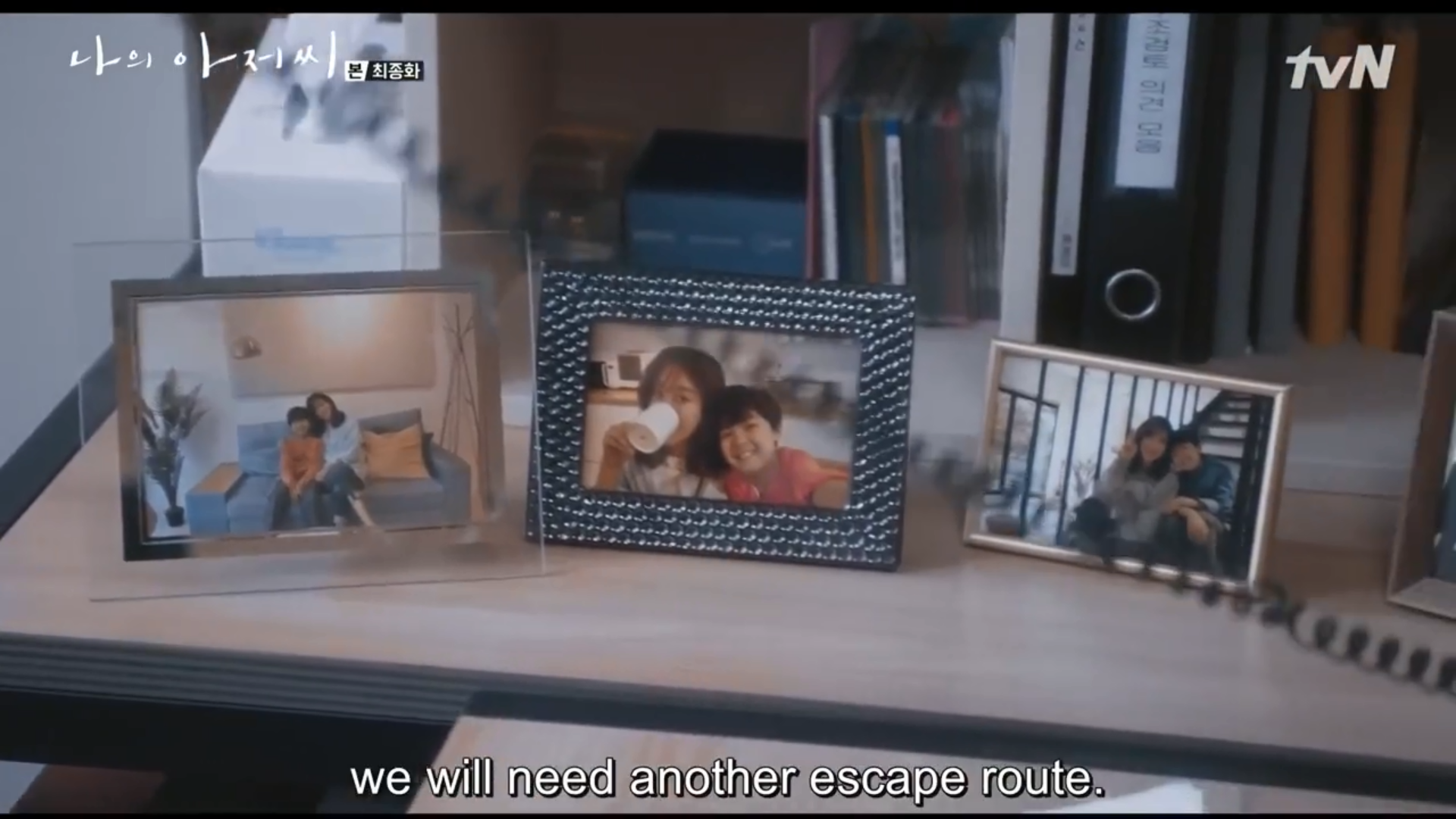 Might that allude to his escape from an unhappy marriage and life with the help of Ji An? Could the “current blueprint” mean that marriage? Am I reading too much into this? You be the judge!

Dong Hoon is a building with cracks and is swaying, and external forces and sudden changes have forced more cracks to show and his foundation is swaying / vibrating. He needs structural reinforcement. So, enter what looks like the least likely source of support. A broken soul. A little young lady with so much hidden strength. She is his metal reinforcement. When he sways she makes him steady. When he shakes she calms him. Dong Hoon fixes structures but couldn’t or wouldn’t or didn’t fix himself. Maybe he didn’t know he needed support. Yoon Hee, his brothers, his work, they all were causing more vibrations to his structure. Creating more cracks. But Ji An was there to provide steadiness to him. Behind the scenes she was running to him to support him. Fighting to protect him. Leaving and crying and hurting while trying to keep him from crumbling. Hopefully she will be there to continue to provide support. As buildings age they need more support, right?! But I hope he can in turn be there to support and dare I say it, love her too!

I only included the meat of this DC Inside post. It’s a long one based on the background lines in the offices during the first and last episodes. I noticed that some subtitles for these scenes weren’t accurate.

The first episode opens to a bustling office scene. A female employee has a phone tucked under her chin while she arranges some documents and gives her lines. “In this case, I don’t think that the….(?) Yes, concrete will not be strong enough (the strength of concrete is not sufficient). I think we will have to look for a different method of reinforcement.”

<We will have to look for a different method of reinforcement>

While this line is said, the scene changes to Jian watering the plants. Could her act of giving water to the plants have meaning as well?

Several more scenes showing Jian are shown while male employees speak jargon about concrete and strength and so on in the background. We then see Donghoon working hard at his desk accompanied by this line:

The line <We have to reinforce it> is repeated several times while Donghoon and Jian are shown in one screen and then alternatively. 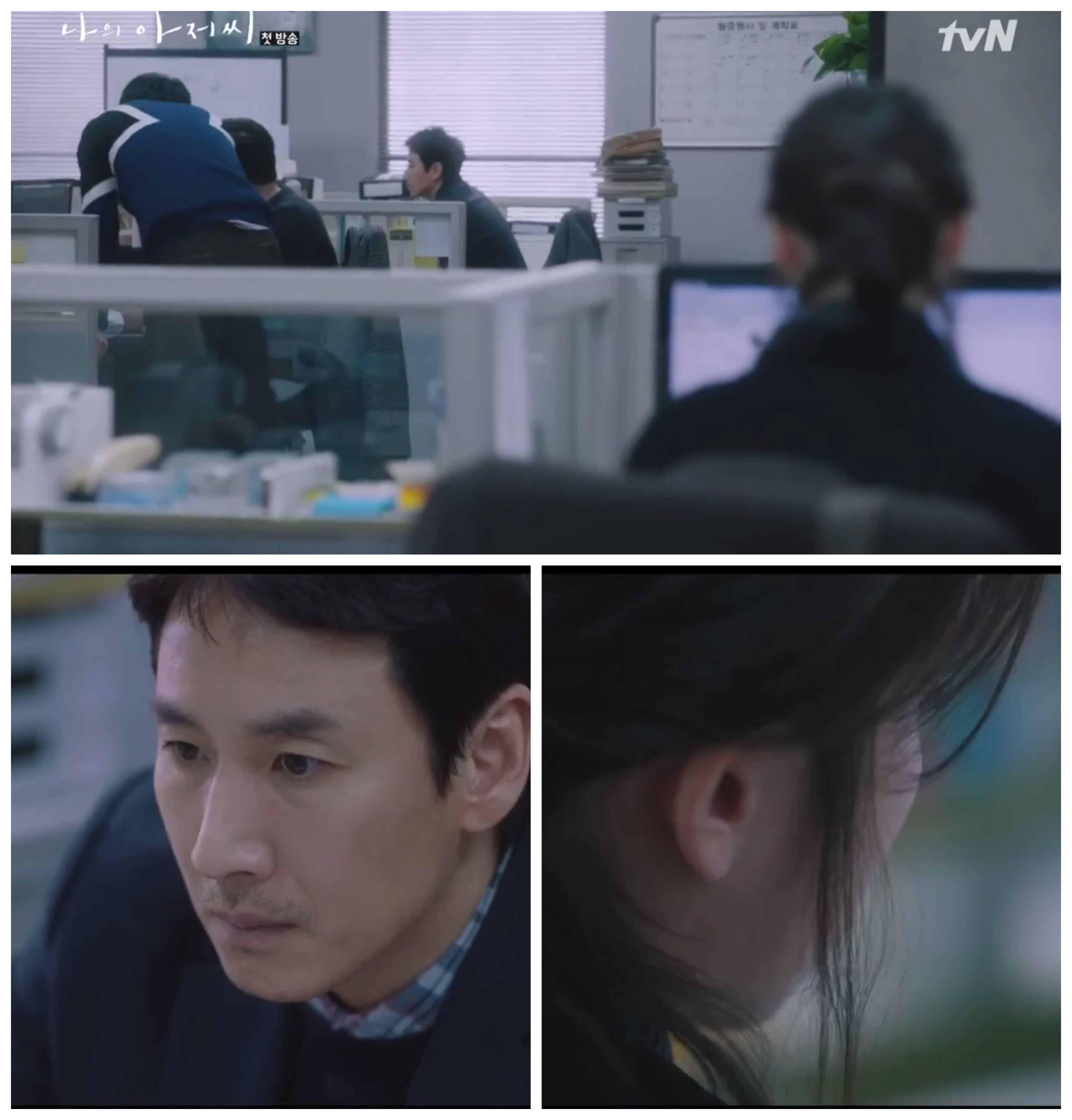 If we were to analyze this, Dong Hoon’s and Ji An’s present situations are like buildings with concrete of insufficient strength and thus dangerous. Everything about their lives needs a method of reinforcement. And I believe that the scenes and lines imply that is each other. To give each other the strength for a new life.

And in the last episode, episode 16.

Donghoon has started a new company with his employees when a phone call comes. Donghoon walks over to pick up the phone and says something along the lines of the following: “Yes. Yes. I’ve checked it. Ah, but when considering emergency situations, in order to evacuate 4,000 people in 20 minutes, you will need one more stairway. Yes. If we go by the current design, there would not be enough time to evacuate in emergencies.”

And then we see Lee Ji An’s brightened and sophisticated figure.

Dong Hoon certainly appears much brighter. However, the lines <need one more stairway>, <if we go by the current design there is not enough time to evacuate>. In the end, Dong Hoon, in his current, stably designed condition, still needs some kind of emergency exit to escape the tightness / harshness of life. That is Lee Jian.

My conclusion from the above lines is “Dong Hoon’s exit is Jian.”

Could I have gone too far? They say that Won Suk PD never puts any fluff in his works (i.e. everything has meaning!). I’m certain that there is meaning even in the seemingly ordinary scenes and lines.

My thoughts are such: there is an already designed / constructed building, but it needs a stairway for emergency situations. Similarly, when the now comfortable and stable Dong Hoon comes across emergency situations in the future, he will need his own stairway. That is Ji An.

So my conclusion is that in the long life ahead of him, the one passage that will let Dong Hoon breathe is Ji An.

More on structures and buildings:

Dong Hoon’s breakdown and how it ties in to external vs. internal forces