I thought Gwang Il represented the general audience, initially skeptical and mocking their relationship…but he came out of it transformed, just like us.

If Gwang Il is the one who has an intimate look into Park Dong Hoon and Lee Ji An’s relationship because he has access to all the wiretap recordings, Park Dong Un is the character who discovers the truth of all the shenanigans that have been going on and synthesizes that truth for everyone in the story. His access, power, and even mobility are at a level that no one else has, except perhaps the Chairman. He becomes a major playmaker in My Mister. Not only that, Park Dong Un actually saves both Dong Hoon and Ji An at different times: Dong Hoon in the beginning of our story, and Ji An at the end.

Let me break it down:

Our first glimpse of Park Dong Un is in Episode 1. Through Saman’s CCTV, he sees that Director Yoon is trying to woo Director Jung. Park Dong Un isn’t even using CCTV to check on a security breach or an event, he’s just hanging out in the Security room to check up on his fellow directors. What’s even funnier is that the Security team lets him! 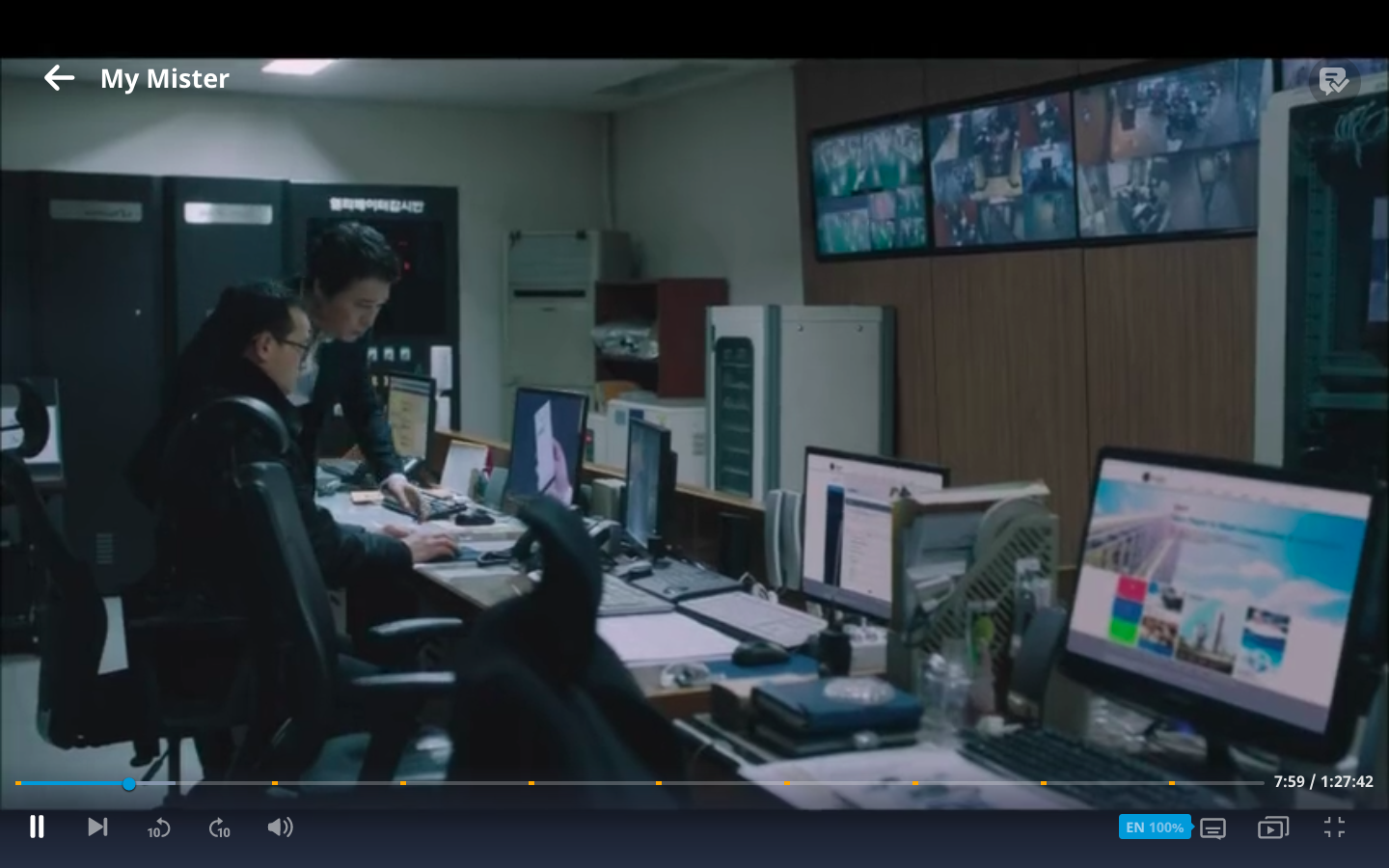 Because he can see Director Yoon texting Director Jung, though, he becomes concerned for Director Jung and sends him to the United States for a month to keep him out of trouble. Dang.

Park Dong Un also gets to read the email tip-off and learns that the bribe was meant for the Managing Director (himself) and not the General Manager (Dong Hoon). He’s amazingly clever and articulate in the Directors’ meeting when he reveals that he knows what was in the email tip. 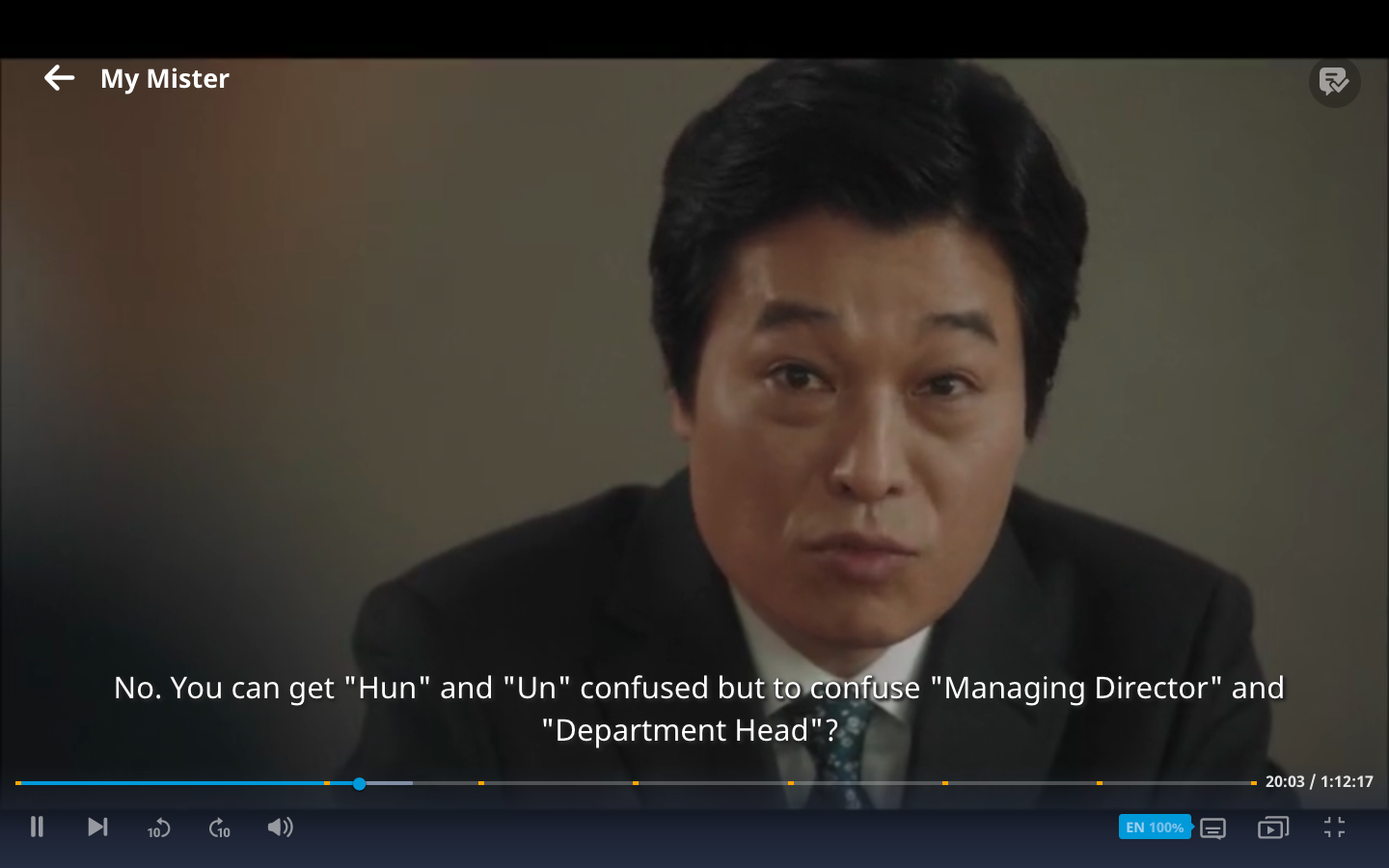 His quick mind pieces everything together and he figures out that even though he was the target, Director Yoon and CEO Do Joon Young also want to fire Dong Hoon.

Soon after, in Episodes 3 and 4, Park Dong Un is demoted and has to move to Busan. But he checks out the CCTV in the Shine bar and sees something fishy going on: 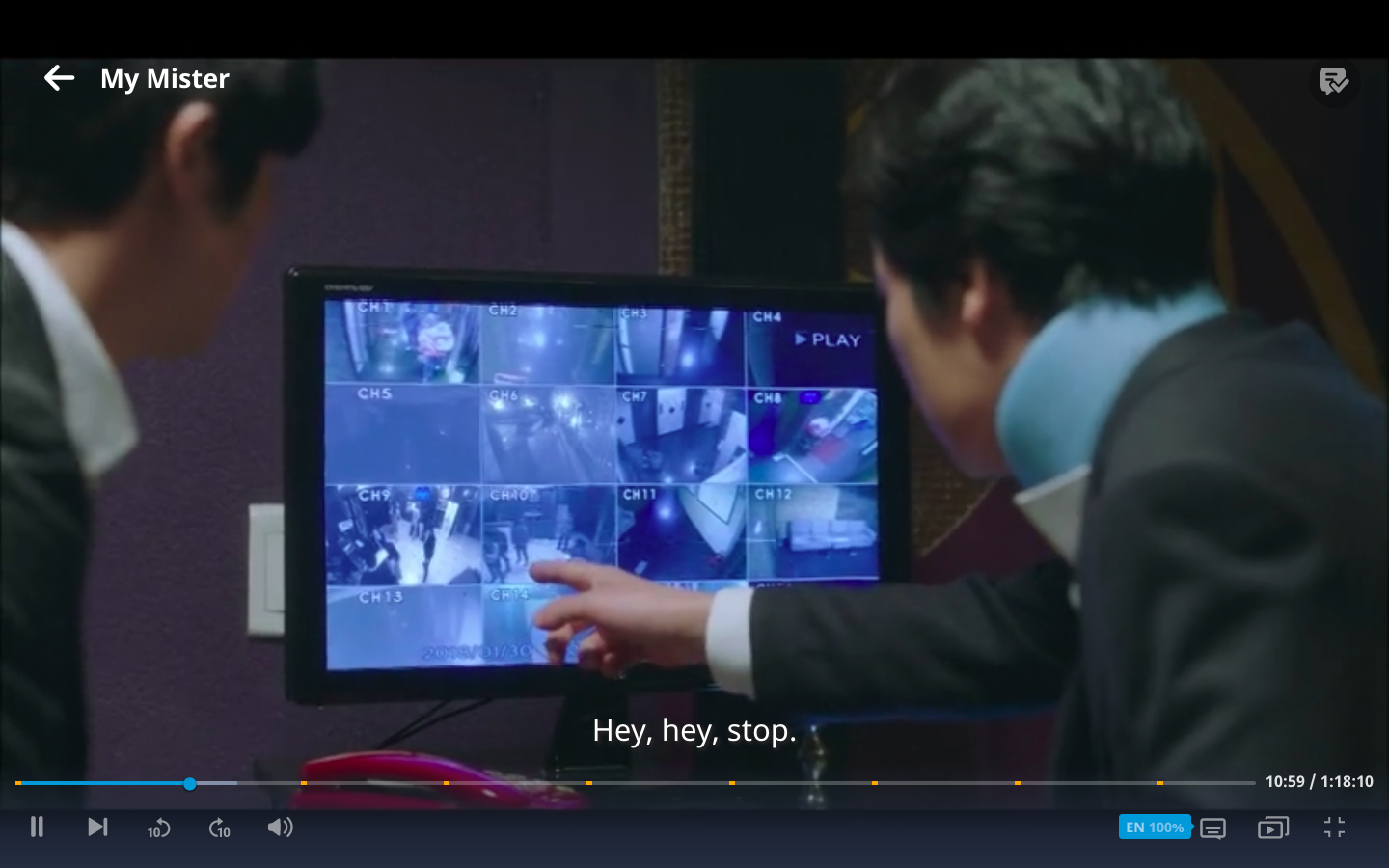 In Episode 5, Park Dong Un becomes a major player when he hands Do Joon Young’s phone records to Dong Hoon. The show never explains where he got them from, but it doesn’t matter. He has them and he urges Dong Hoon to dig up some dirt about Do Joon Young. This leads to a complete breaking open of Dong Hoon’s façade of a happy marriage.

Much later, in Episode 13, we see him with the detective at the police station. The detective shows him CCTV from the streets around Shine bar on the night of the incident. 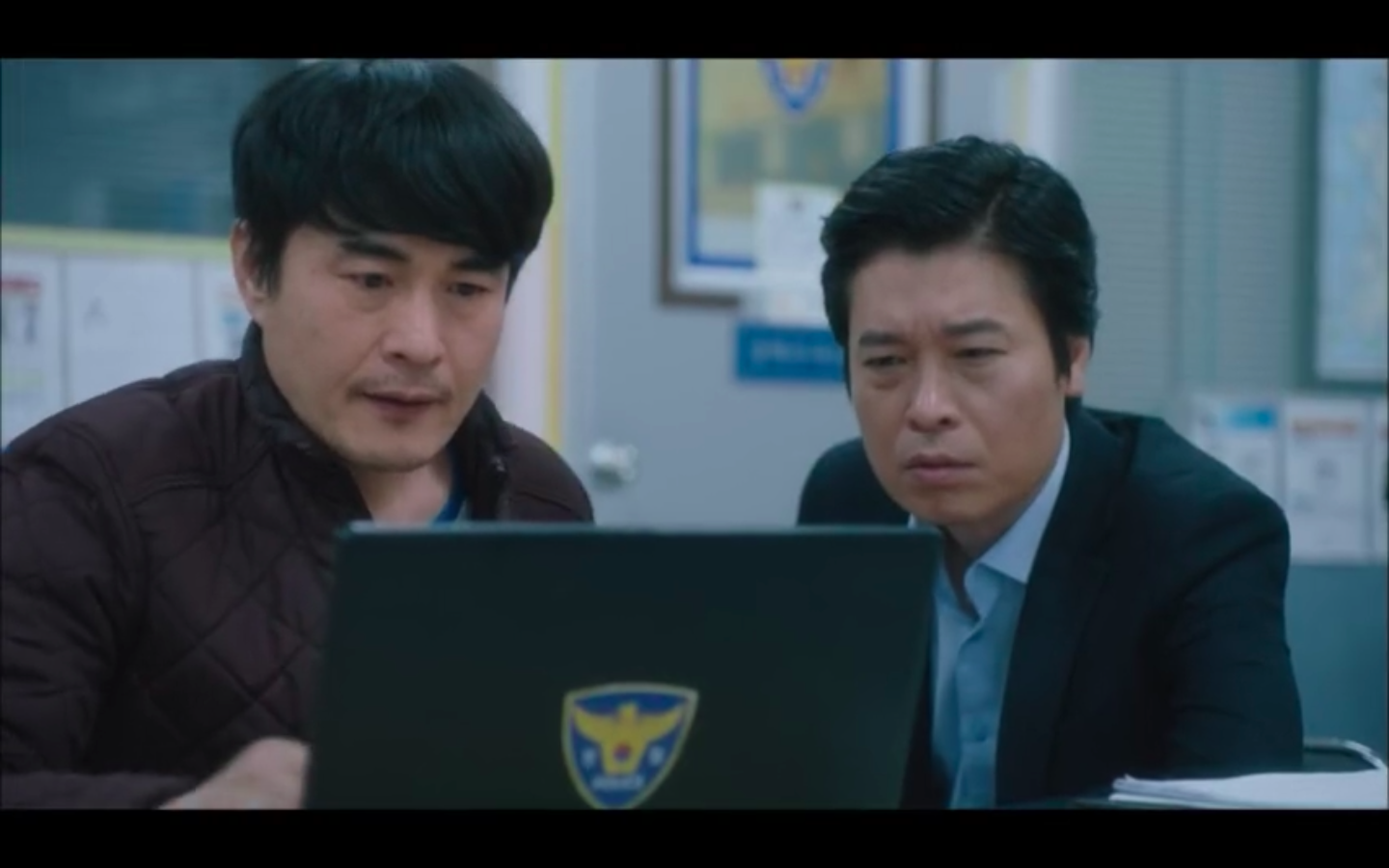 And in Episode 14, he’s in the investigator’s room at the police station when they’ve caught Ki Bum. 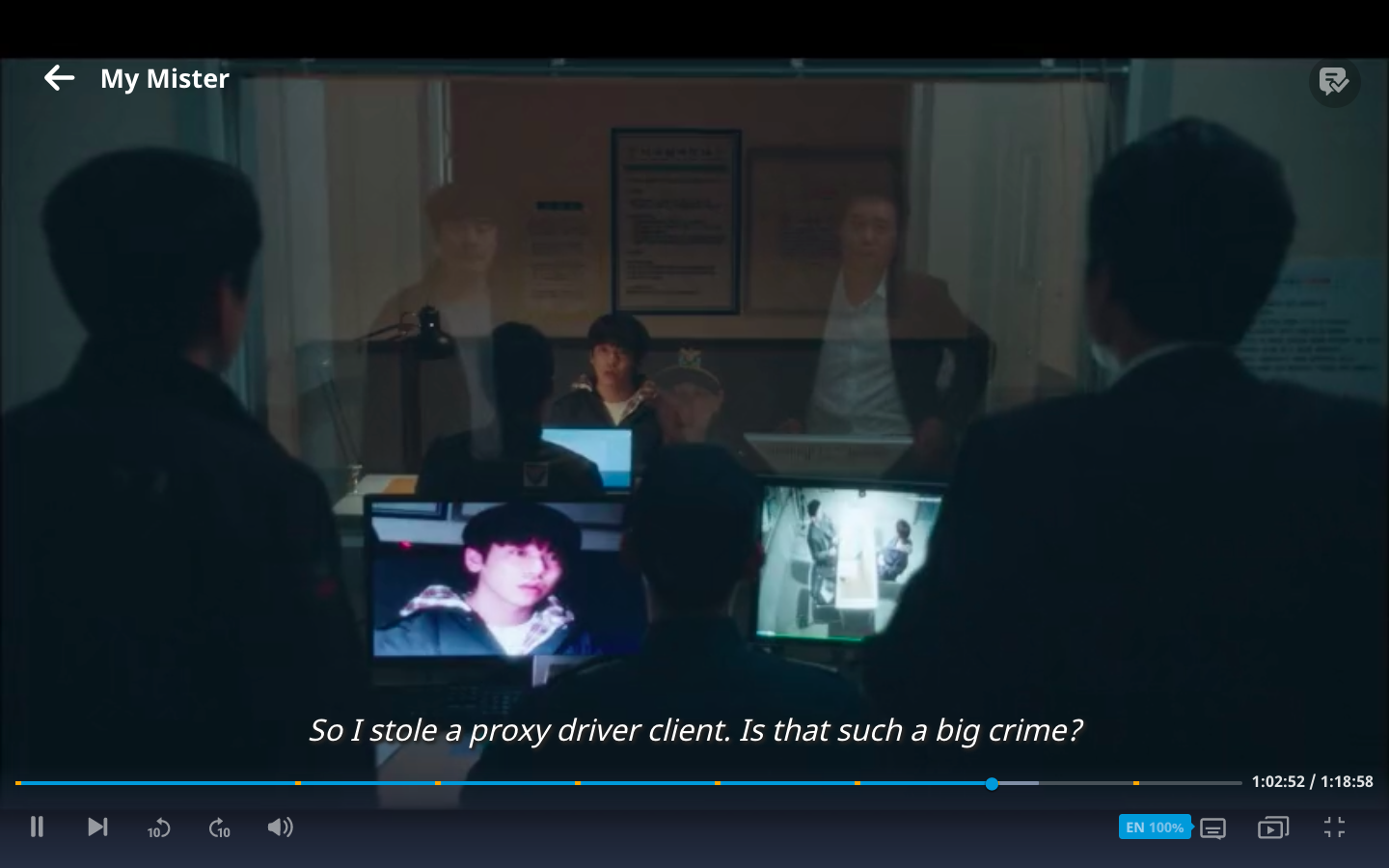 As this sequence unfolds, Park Dong Un learns that Ji An has been wiretapping Dong Hoon’s phone, which shatters the façade that there’s a perfectly innocent, non-spying relationship between Ji An and Dong Hoon. Poor Dong Hoon!

Throughout the show, we see that Park Dong Un is the only one in My Mister with access to CCTV and behind-the-scenes happenings whenever and wherever he needs it, and his access to all of this information helps him find out the truth. His access to Do Joon Young’s phone records also acts as a catalyst for Dong Hoon to find out the truth about his marriage.

Obviously, Park Dong Un’s position and power (and desire) are what enable him to gain access to the Saman CCTV room all the time. But he also has the power to move people around — like sending Director Jung to the US for a month — and influence the decision to put forward Dong Hoon as a candidate for Managing Director.

Park Dong Un also saves Dong Hoon in the beginning of the show by revealing the truth about the bribe scheme and enabling Dong Hoon to keep his job. If it weren’t for Park Dong Un’s integrity, as well as his standing with the Chairman and with the rest of the Directors, lowly Dong Hoon may have been done for.

Toward the end of the show, Park Dong Un has the chance to save Ji An from jail by not pressing charges — and he graciously takes it. As powerful and as disgraced as he was, Park Dong Un could easily exact extensive revenge on JA and Ki Bum and make them pay for a long time. But he kindly yields his power and allows the two young ones to keep going with their lives. I believe that because the Chairman asks him to extend forgiveness, and because Park Dong Un can see the truth that Dong Hoon and Ji An have a special friendship, he submits his desire for personal revenge to the greater good. Park Dong Un knows when to give up his power — and when to use it.

Also, Park Dong Un is the only one besides Chairman Jang who almost never wears a tie. The rest of the Saman directors always wear ties, but Park Dong Un is consistently shown in an open collar and suit coat. This costuming must have been deliberate by PD-nim to reinforce Park Dong Un’s powerful standing over and above the other directors throughout the show.

Interestingly, the only time we do see him wear a tie is in the directors’ meeting where he’s revealing the truth about the bribe (above). Perhaps when all the directors are together they all have to wear ties!

(As an aside, Dong Hoon only wears ties once he becomes a Saman director. By the end of Episode 16, though, he’s his own CEO and he moves to the open-collar look himself.) 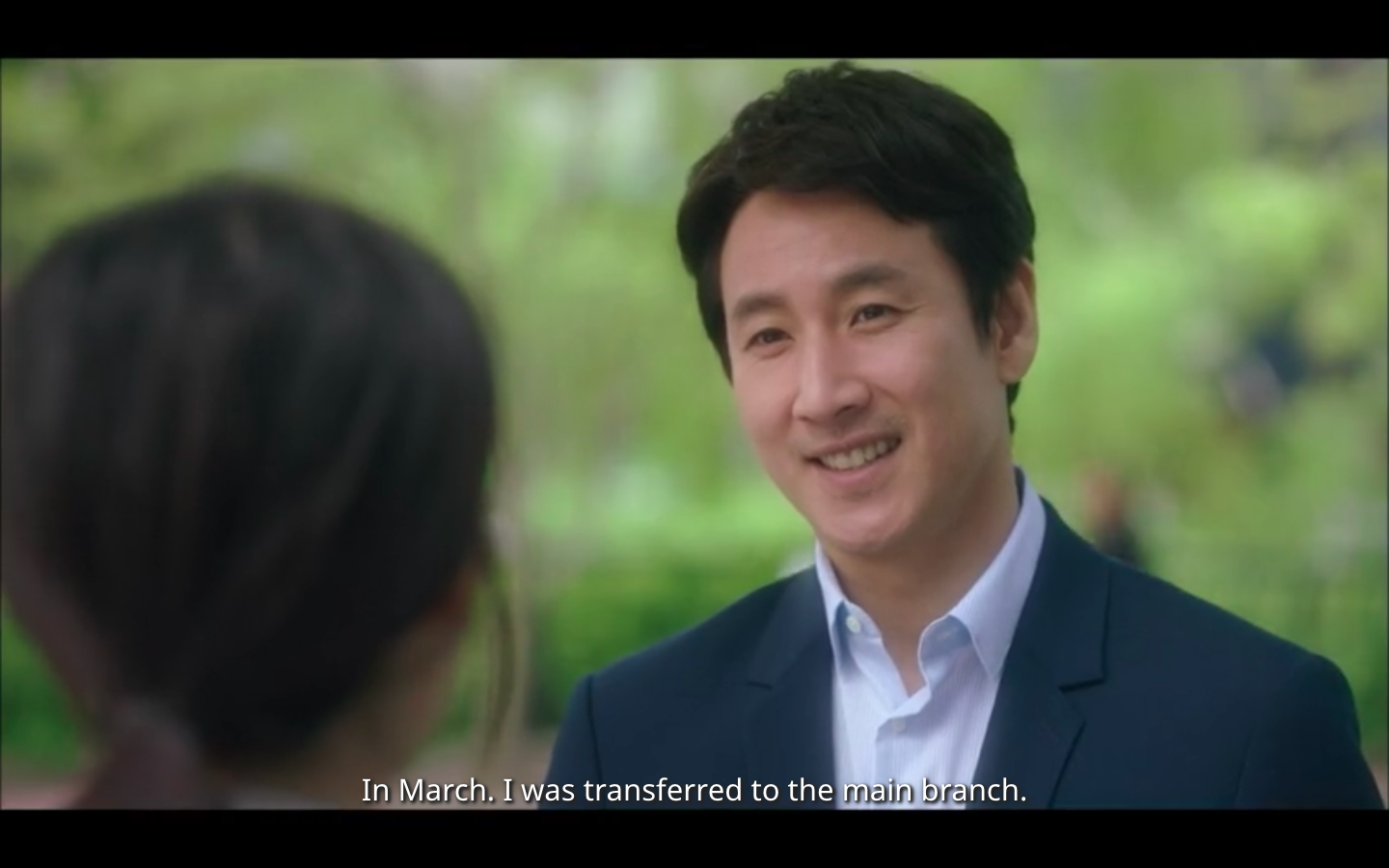 Just had to squeeze in a shot of Dong Hoon smiling.

You would think that if you were demoted and sent to Busan that you wouldn’t see your colleagues very often. Nevertheless, after Park Dong Un has gone to Busan we still see him meeting with the Chairman, going to job sites, and meeting with Dong Hoon. 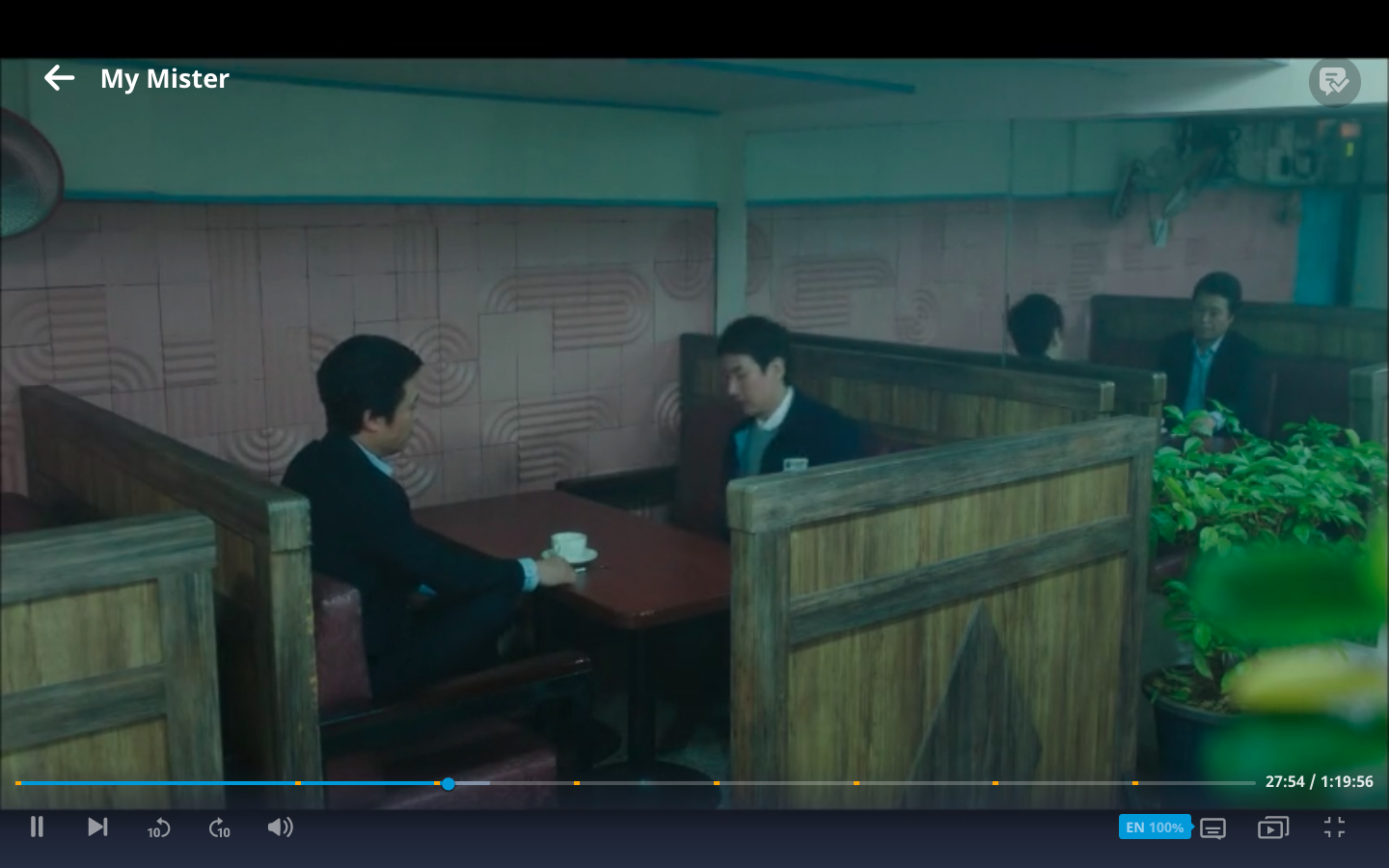 I only noticed his mobility during a re-watch (and not during the first watch), because I was thinking about Dong Hoon and Ji An and how it seemed like her moving to Busan was like moving to the end of the world. Why did Busan seem so far away and their parting feel so final?

Yet Park Dong Un makes the distance seem like nothing since he’s always in touch with his people and creates opportunities to see them. His mobility is a stark contrast to Dong Hoon and Ji An’s mobility.

My Mister is endlessly rich and fascinating because there’s so much to delve into with even supporting characters. When I first watched the show, I just thought Park Dong Un was Dong Hoon’s somber supervisor and ally. Only after seeing him, repeatedly, in some of the same situations (intently staring at CCTV screens!) and seeing how authoritative he was, did I realize what a key role he played in the entire story. He’s kind of the bomb.