I just finished Episode 4 and after sobbing and laughing then sobbing again…I realised this: Episode 1-2 were thrilling and exciting and made me think it was some kind of thriller/corporate mystery.  But episode 4 was when the show sank its claws into me. And I didn’t even realise it then, because it was done so, so subtly through the use of wiretapping/flashbacks.

EPISODE 4 IS A STORY IN ITSELF: Sang Hoon’s Shame

I just want to deconstruct how the writer did it because she built up the tension and suspense so beautifully until that dramatic climax.

The first signs of something wrong: The trail of puke that eventually leads Ki Hoon back to Yura. Something gross that grabs our attention. But Sang Hoon completely doesn’t pay attention, appears to be on the brink of tears, then walks off.

Sang Hoon buys his coffee. While the machine prepares his coffee, his shoulders quiver and his whole body starts to shake. His face crumbles and he gasps. Then he falls to a crouch where we assume he cries, shielded by the laundry gently swaying in the wind. 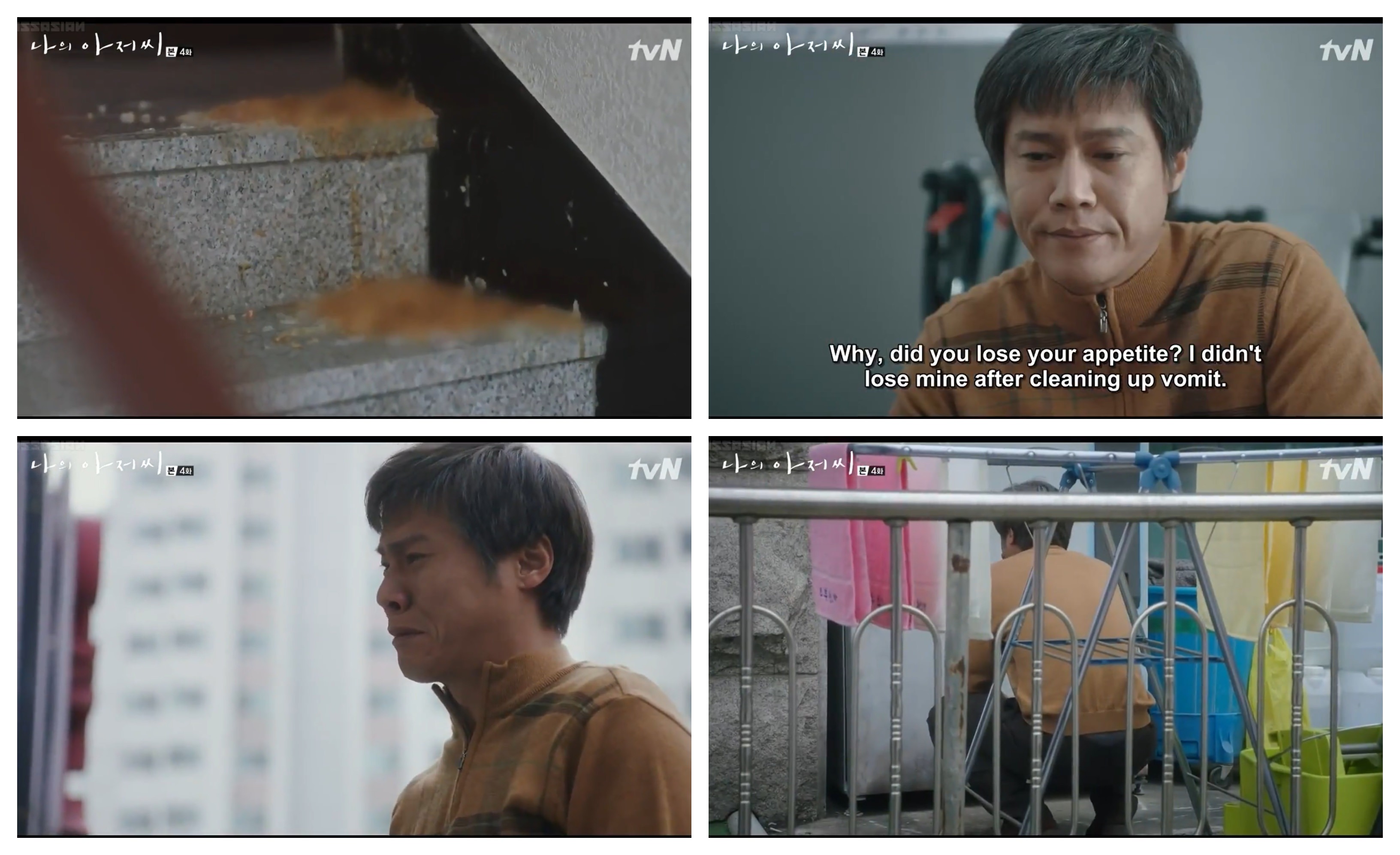 Then we see Omma, plodding up the stairs of a remote hill. We don’t know where she’s going. She’s weighed down by two handbags which appear extremely heavy despite their size (another symbol of bags as the weight we carry!!!).

Scenes at the office between Ji An and Assistant Cheong.  Then Ji An at the pharmacy. Then with Ki Beom. You haven’t found anything on Park Dong Hoon? No? Why?

Then we see Dong Hoon climbing up the stairs (paralleling Omma) of the subway station. This is the first time we hear of Gyeom Deok (Sang Won), although we know nothing at this point, not even that Omma went to a temple. We get three sparse lines: Omma came here. Is she alright? She didn’t say anything.

The three brothers meet. Dong Hoon and Ki Hoon, one slightly less clueless than the other. Omma went to the temple. Contrast: Ki Hoon’s furious reaction to Dong Hoon’s calm exterior. Sang Hoon stumbles out of the washroom, eyes red and swollen. He says he has the flu but is eventually forced to spill the beans. Then he pretends he was crying because of the show. The scene of Sang Hoon trying to restrain his sobs while staring at the television = Oscar winning performance for me. Sang Hoon stomps out, and the three brothers meet outside the bar where all is revealed. 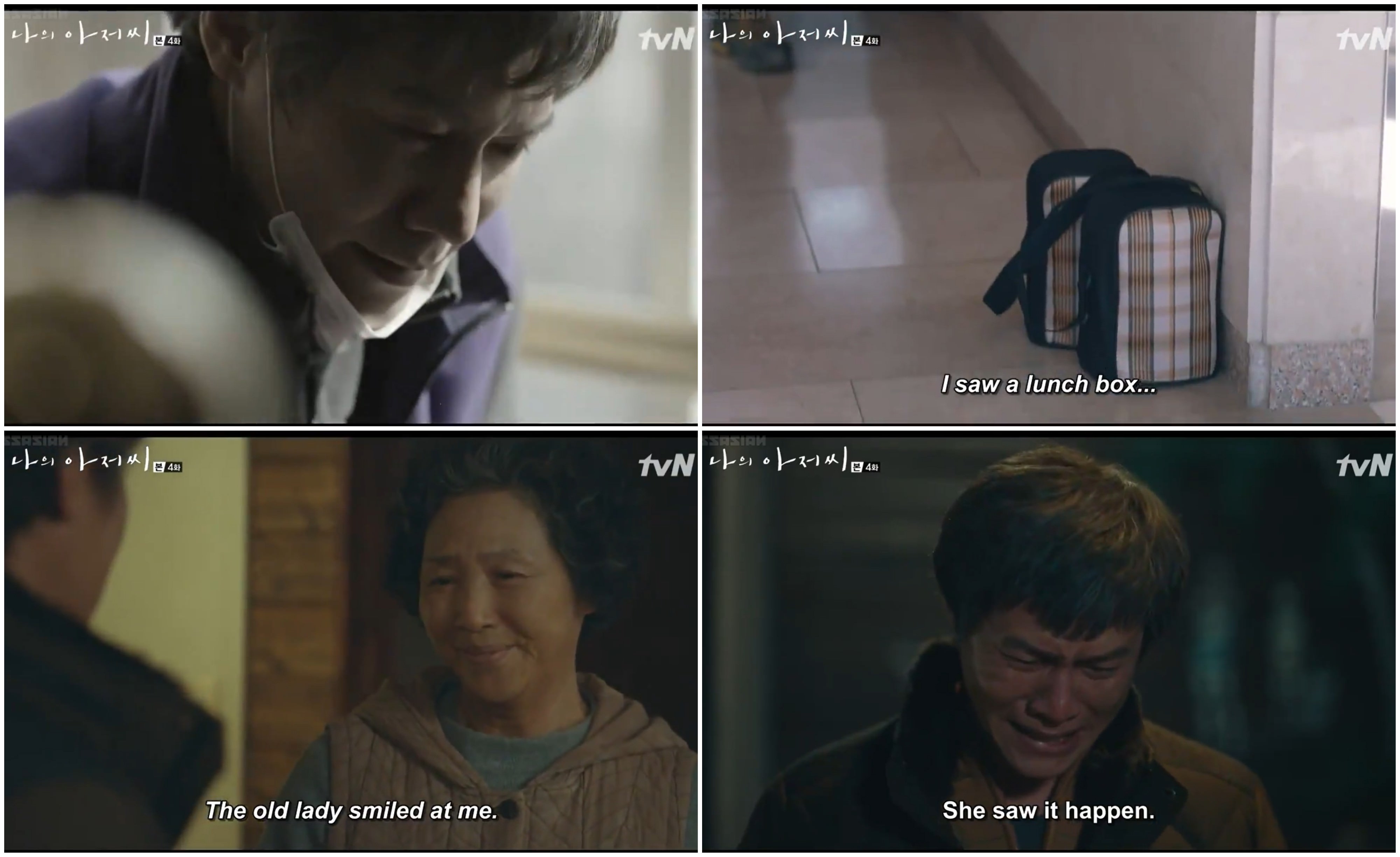 Ki Hoon’s reaction and outburst: Dong Hoon restraining him with all his efforts. Ki-Hoon-ahh!! After Ki Hoon lets out a string of curse words and struggles, he’s spent. 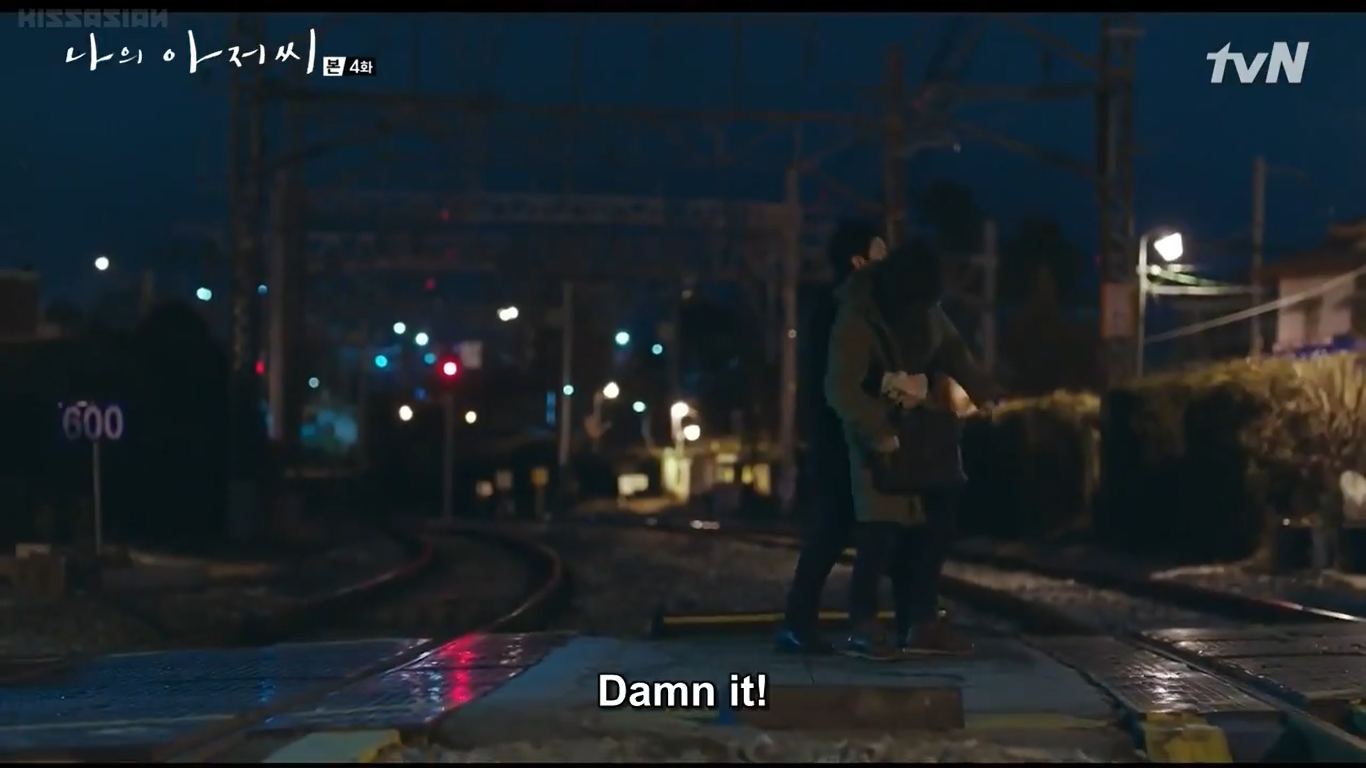 Do Joon Young and Kang Yoon Hee: Yoon Hee talks about Dong Hoon’s loneliness, and how that made her feel so lonely. But Do Joon Young is totally not listening.

Yoon Hee gets home. Dong Hoon is frozen at the couch. Something is off and she notices it, but he doesn’t answer her. 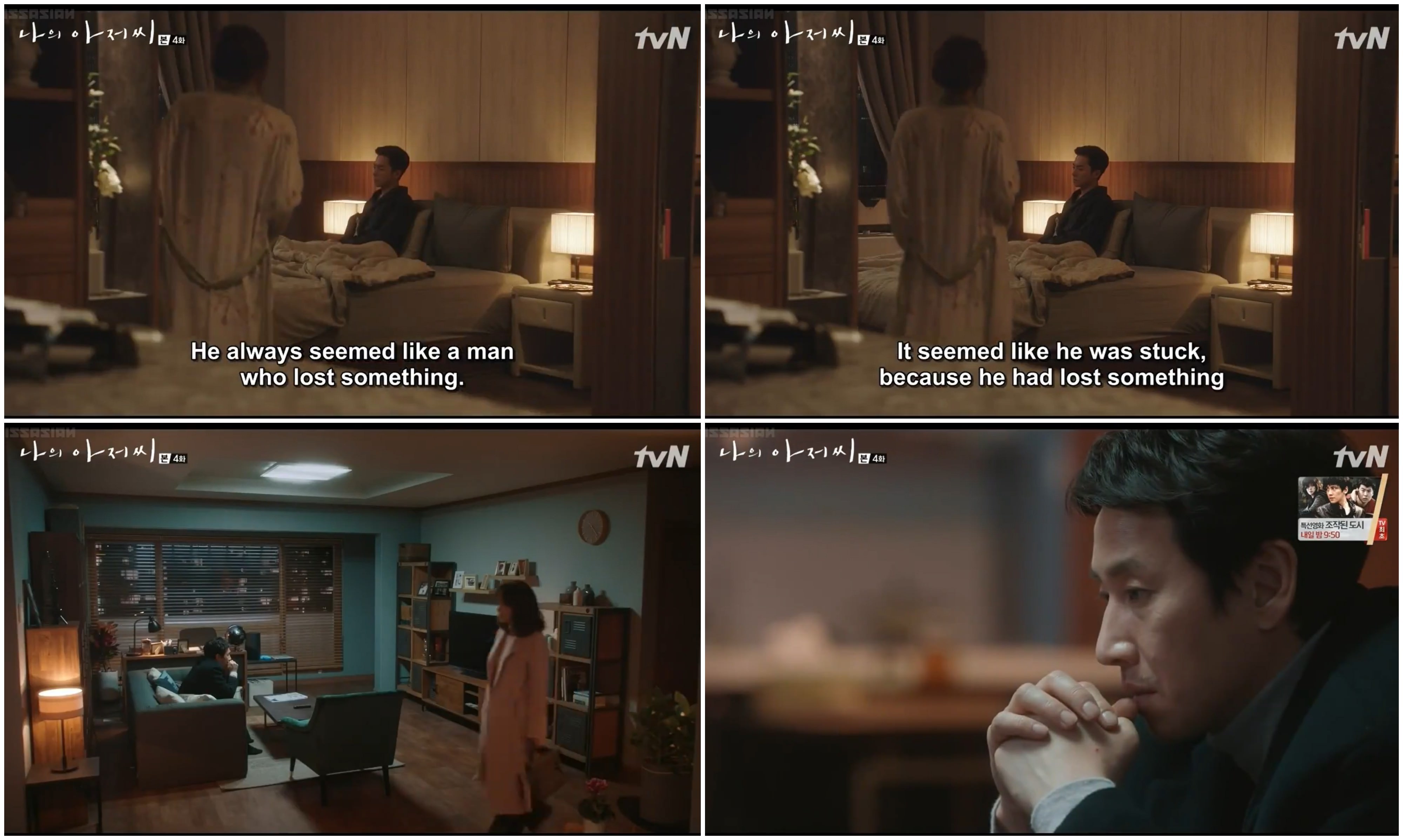 Ji An collapses at work. Everyone can’t understand, but Dong Hoon stares at her. He seems to get it, and he’s worried.

Omma at the temple again. We see Gyeom Deok for the first time. Everyone is fine? No, they’re all not fine. She walks off, weighed down again by her two heavy bags even on flat ground.

Ji An at the convenience store drinking a beer. Dong Hoon tells her to put some medicine if it hurts.

He does the same funny thing: cigarette in mouth. This time, he doesn’t even try to light it. Something strikes him, and he storms off. The cigarette, lighter and cigarette box, all go in the trash AGAIN. (cigarette = gives Dong Hoon courage to do violent things/let him express himself??)

Sang Hoon and Ki Hoon pick up Omma on the way home from work, their faces all thoughtful and resigned/sad.

The subway: For the first time, Ji An starts listening in on Dong Hoon’s life. Because she’s fed up Ki Beom can’t dig any dirt on him. So she decides to take things into her own hands. And it changes her completely. The same goes for us– we, the audience, are now being led into Dong Hoon’s inner life.

We learn that on the first night, Dong Hoon soothed Ki Hoon like a child, like his father once did. Go to sleep, it’s no big deal. Ji An’s face remains expressionless as she returns home, serves Halmoni persimmons, even when she hears again his gentle words saying, “If it hurts, put on some medicine.”

The scene at the villa owner’s office starts. The sound of Dong Hoon’s quick steps up the staircase. Ji An’s defenses are about to fall!!

There are some things you can never do in front of family. I could kill you! This triggers Ji An’s painful memory. How she killed Kwang Il’s father. Her tears start falling. The camera gives her privacy — we see her silhouette, her back against the light.

The villa owner arrives at Omma’s with the persimmon basket and apologises.

The Hammer makes its appearance. Structural engineers the world round get a stab of adrenaline in the arm. Now we’re into the real climax. Dong Hoon lets go completely!! We hear him use the word “Bastard!!” And he starts hacking things apart! 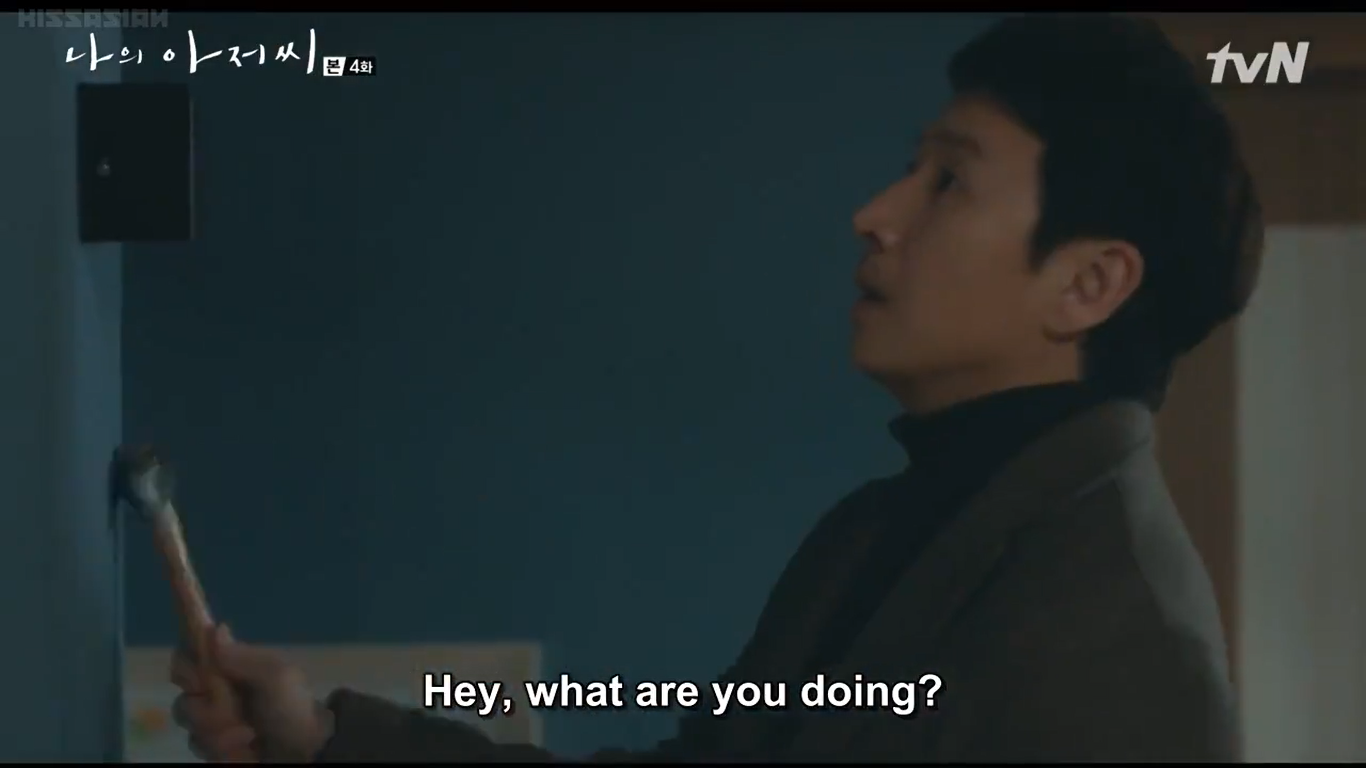 Dong Hoon, quick, shallow breaths. The weight of what he has done! His energy spent. He buckles to the ground. In the background, Christmas lights. Ji An’s face as she hears him breathing is softer than we’ve seen the whole show. This is the effect Dong Hoon’s actions have had on her.

Jeong Hee is back! This is  the first time we meet Jeong Hee. When we heard of Thailand, how many of us thought of shady things? Maybe she was involved with ..? (Later we would learn about her and Gyeom Deok and understand the connection.) Some of us even thought then that perhaps she was a love rival.

Dong Hoon smiles as he enters — one of the first times we’ve seen him smile so widely. But when he sits down, alone, the smile fades. We realise the smile is only for his brothers. He goes to see Jeong Hee – they share an intimacy which he hasn’t shown with anyone else yet, something even closer than with his wife. They are intimate, but she isn’t the one who has his heart.

The one who has his heart, as he later reveals while talking to Ki Hoon, is “the one who knows me.”

There’s someone who knows me. And I think I know a lot about her too. This mirrors his confession in episode 15.

Are you happy? I’m sad. Because she knows me.

Ji An breathes, long and deep. She is no longer the same Lee Ji An. 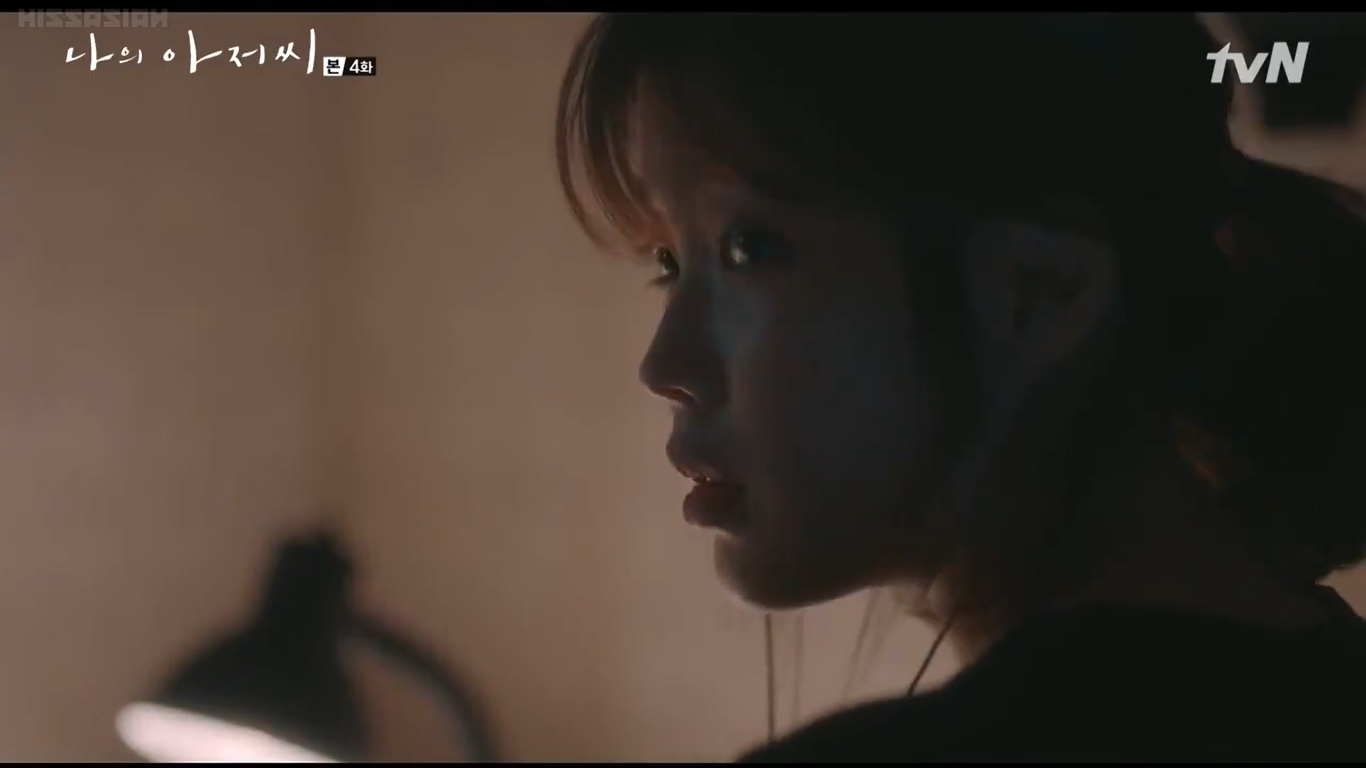 And with that, the seeds of Dong Hoon and Ji An’s beautiful but unusual relationship have been sown.

As I wrote this recap I realised this was like a complete short story, in the last thirty minutes of episode 4 alone. The mysterious beginnings, the inciting incident, the build up to the climax, the climax, then the denouement. AMAZING!